Niger State Governor, Abubakar Bello, on Tuesday made a minor change in his cabinet.

The governor redeployed the Commissioner for Land and Housing, Haliru Jikantoro, as well as his counterparts in Agriculture and Rural Development, Aliyu Abdullahi and that of Local Government and Chieftaincy Affairs, Kabiru Musa.

A statement by the Commissioner for Information, Culture and Tourism, Mr Jonathan Vatsa, after the last State Executive Council meeting for the year 2016 revealed that there would be more changes in 2017.

Governor Bello, who thanked the commissioners and council members for their cooperation and contributions, was not so impressed with their performances saying he could only give a pass mark of 60%.

“I commend every one of you but you must all sit up because 2017 will be a year of fulfilled promises. I can give you a pass mark of 60% but much is expected of you by next year.

“Everybody must sit up because we must deliver the dividends of democracy to the electorates,” he said.

Governor Bello redeployed the Mr Jikantoro to Local Government Affairs while Mr Abdullahi is to take over from him.

He also directed Mr Musa to take over from the Commissioner for Agriculture and Rural Development.

Similarly, the Permanent Secretaries of Ministry of Health, Dr. Umar Ibrahim Tiffin, that of Justice, Mr Ndagi Wali and the Director of Hospital Management Board, Dr. Makunsidi are to report to the Head of Service for new redeployment.

The Director of Planning and Statistics in the Ministry of Health would also resume at the Hospital Management Board.

While wishing all members a Merry Christmas and Happy New Year in advance, Governor Bello tasked them to show more commitment in carrying out their functions in accordance with his mandate.

He said that “more changes will come with the new year”. 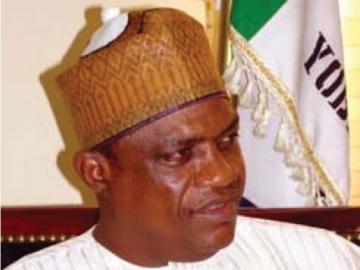 Unidentified gunmen suspected to be members of

Boko Haram, on Sunday, set ablaze residences of the Speaker of the Yobe State House of Assembly, Adamu Dala Dogo, and two others.

The other residences that were burnt down were that of a member of the House of Representatives, Goni Bukar and that of Alhaji Sheriff, the younger brother of the Yobe state Governor, Ibrahim Gaidam.

The residences of the speaker and the two others were located at Shagari Low Cost Housing Estate in Damaturu.

Unconfirmed reports also had it that the attackers  beheaded two men in the area.

Witnesses said the attacks were launched between 2AM and 4AM, Sunday morning, when the few people in the town were fast asleep and shortly after the 24 hour curfew imposed on Damaturu entered its second day.

“The fact is nobody was killed in the houses of the three personalities because both the Speaker, the Member of the Parliament and the governor’s brother evacuated their immediate families soon after peace eluded Damaturu.” “The local guards attached to all the houses have also flee,” Kabiru Musa, a resident of the area said.

“However, when I peeped through the window this morning, I saw a military pick up van zooming up with two beheaded bodies…it was a gory sight. I also saw smoke billowing in the direction of the house of the speaker,” Musa narrated.

A source at the Yobe State Police command confirmed the burning of the three houses and the killing of the two civilians.

The Joint Task Force (JTF) in Yobe State said about 60 suspected members of the Boko Haram were arrested over the weekend as the force confirmed that confrontation between security forces and insurgents was still ongoing.

Lieutenant Lazarus Eni, the spokesman of the JTF said that security forces have recorded “unprecedented success” in the clamp down on “suspected terrorists.”

“Over 60 suspects have been arrested and are being interrogated. As I am talking to you now (6.10pm) our men are exchanging fire with the terrorists in a location in Damaturu,” he said.

It was gathered that seven married women and 12 children were among the suspects arrested by the JTF operatives during a raid at Nasarawa, Pawari, Babbar Tsangaya and Nayinawa settlements, all in Damaturu.

Residents complain that water and electricity have been cut off completely in Damaturu.

“We are passing through trying moments but we pray for light at the end of the tunnel. We hope the cordon and search will yield results and rid the town of trouble makers,” Hajiya Falmata, a food vendor said.