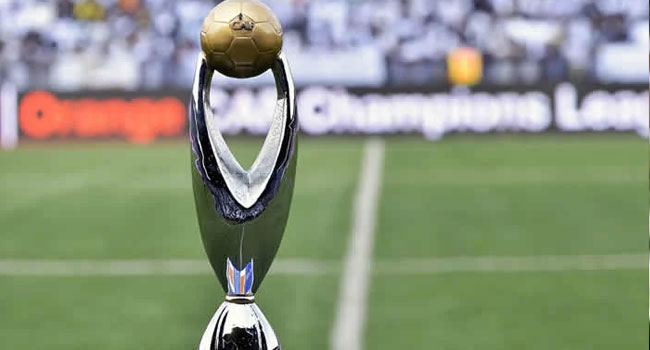 Mohamed Sherif scored his sixth goal of the competition after 53 minutes to put the Cairo Red Devils ahead at an empty Stade Mohammed V because of the coronavirus pandemic.

A brilliant goal from Mohamed ‘Afsha’ Magdy on 64 minutes left little doubt about the outcome in a disappointing finale to the marquee African club competition.

Amr el Sulaya rubbed salt into the wounds of Chiefs with a third goal in the 74th minute, slamming a back-heel past Nigerian goalkeeper Daniel Akpeyi.

Chiefs were struggling to contain Ahly late in the first half when they suffered a massive blow with the red-carding of Happy Mashiane.

The forward stamped on the right leg of full-back Ahmed Tawfik and, after initially flashing a yellow card, the Burundi referee checked the foul on a monitor and changed his decision.

It was a historic victory for Ahly, who became the first club to win the title back-to-back three times.

He succeeded in 2016 with South African club Mamelodi Sundowns, and again with Ahly last season in an all-Egyptian final against fierce rivals Zamalek.

Ahly pocket $2.5 million for winning the Champions League and are guaranteed at least another $3.5 million when they compete in the FIFA Club World Cup in Japan.

Before travelling to the Far East, the Egyptian club that have won 22 African titles will play CAF Confederation Cup winners Raja Casablanca of Morocco in a one-off match for the CAF Super Cup.

It was a bitterly disappointing first appearance in the final by Chiefs, whose lone CAF title came 21 years ago when they won the now-defunct African Cup Winners Cup.

The Soweto outfit matched Ahly early on and had the lone shot on target in the opening half with an effort by Serbian forward Samir Nurkovic that Ahly goalkeeper and captain Mohamed el Shenawy comfortably saved.

Starting the second half with 10 men, Chiefs packed their defence in the hope of snatching victory through a breakaway goal or a penalty shootout.

But the resistance lasted just eight minutes before being undone by a superb pass from Tawfik that Sherif chipped over Akpeyi.

Goals from Zimbabwean Khama Billiat and Khotso Malope for the Amakhosi (Chiefs) put them in control midway through the second half at Soccer City stadium in Soweto.

But Celtic, who came into the match with a perfect three-victory record under former Chiefs coach Steve Komphela, hit back by scoring twice inside three minutes to remain second.

Menzi Masuku halved the deficit on 76 minutes and Ndumiso Mabena equalised with a half-volley that flew past third-choice goalkeeper Bruce Bvuma.

The 23-year-old was given a rare start because of injuries to first choice Itumeleng Khune and Namibia-born reserve Virgil Vries.

Italian coach Giovanni Solinas, hired recently to turn round the fortunes of once mighty Chiefs after three trophy-less seasons, admitted the lowly placing was unacceptable.

“That position is no good for a big club like Kaizer Chiefs. The team must improve together.

“We switched off after going two goals ahead and lost concentration. Celtic posed no threat and suddenly they were level.

“I am disappointed because we had the game in our pocket. I need the change the mentality of the players and that is going to take time.”

But time is not on the side of Solinas, a 50-year-old who has spent most of his coaching career in Algeria and not won a major trophy.

Scot Simon Murray scored his first goal since joining Wits from Hibernian to complete a convincing performance against fifth-place AmaZulu.

A couple of other close-season signings, Gift Motupa and Mxolisi Macuphu, also scored for the pacesetters, who have averaged two goals a game in five outings.

SuperSport have recovered well from a poor start and Zimbabwean Evans Rusike netted just before half-time to deliver a 2-1 home win over bottom side Chippa United.

Baroka were another team to snatch a late point with Ranga Chivaviro scoring in the final minute to force a 1-1 draw at home against promoted Highlands Park.

Stuart Baxter the Bafana Bafana coach has been confirmed by the management of South African club Kaizer Chiefs as the new manager of the club.

With the Russian Vladimir Vermezovic exiting his position as the manager of Kaizer Chiefs the likes of Doctor Khumalo, Ace Khuse and Arthur Zwane had hold down the position while the management of the club went in hurried search for a replacement.

The announcement of securing the signature of the fiery Serbian was made via the official website of the club with a statement by the executive Chairman of the club; Kaizer Motaung saying it is a great pleasure getting Serbian Stuart Baxter on our side as the news manager of Kaizer Chiefs as he will fit into our strategy with so much wealth of knowledge internationally.

Also we see that his expertise being a coach instructor himself which make him a mentor for coaches and coach to be  will also help the club in various ways to mention a few, the youth academy.

Baxter’s coach career has spanned across the continent with clubs like Vitoria Setubal, Halmstads BK, AIK, F.C. Lyn Oslo, England Under-19, South Africa, Helsingborgs IF and Finland among others.