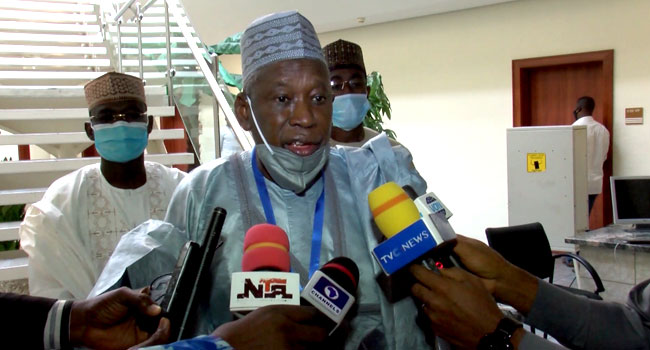 Kano State Governor, Abdullahi Ganduje, has said that the multi-billion naira economic city under construction has reached over 70%, as his administration hopes to boost commercial activities in the country.

Speaking to State House correspondent on Wednesday, after a closed-door meeting with vice president Yemi Osinbajo, Governor Ganduje noted that the project has state-of-the-art features that would boost productivity and service delivery.

It is a joint venture development agreement between the state government and Brains and Hammers Ltd, and the Governor believes the completion which is at an advanced stage will be an answer to the over-populated markets in Kano.

“Kano is a megacity, highly populated and therefore commercial activities must be encouraged, and so all the markets are terribly filled up because we need to expand them.

“So to create a new economic city is the answer and it has reached an advanced stage and there are so many facilities there; apart from the shops, there are mega-hotels, banking halls, and also, there are trailer parks and so many other things you expect to see in an economic city and the work has reached over 70%,” the Governor revealed.

Governor Ganduje also informed journalists about the efforts his administration is making to ensure that the compulsory free education from basic to secondary is implemented.

He stated that an education promotion committee has been set up with initial funding of N20 million for schools that need to be renovated.

The Ganduje added that the committee would interface with well-to-do indigenes from local governments who would contribute to funding free education in the state.

He said, “We have designed a package for direct labour, rehabilitation, and renovation of our respective schools; now we have created an education promotion committee and we have given them the sum of N20 million to identify schools to be renovated, with the scope of work to be undertaken and we have given them three weeks to complete that project so that there will be a report and our engineers will give a report.

“They will also invite the well-to-do indigenes of the local government who will also provide their own contribution.”

The Governor added, “After completion of the report, they will tell us how much they have been able to gather from the indigenes of the local governments and then we will give them money, and you know we have declared education to be free and compulsory from basic to secondary, so we have to involve community participation.”

Governor Ganduje also revealed that the state has been able to pay up to date, the counterpart funding for the Universal Basic Education Programme.

He also revealed how the state will generate adequate funds for the free education initiative for school children in Kano.

“I am happy we have been paying our counterpart funding for UBEC and we are up to date.

“And also, we have an education trust fund of which 5% of our IGR and 5% of the revenue earning from the statutory allocation of the local government and also, 2% of all contracts that have been awarded in Kano. We opened a basket where we keep such funds,” the governor stated.