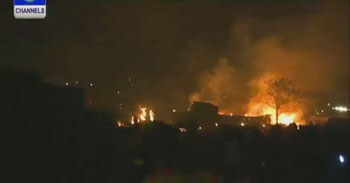 An unfortunate fire disaster has razed a large part of the residential part of the Kara village in Ogun State.

Scores of houses and kiosks were brought down by the fire but no loss of life has so far been reported.

Eye witness account says the fire started at about 7pm and was caused by a cooking fire inflaming a nearby generating set.

The fire service arrived the scene at about three hours after the fire started exhausted their only tanker then drove back to get more water while the fire raged on.

Property worth millions of naira was lost in the fire as well as valuable documents.

Many residents have now been rendered homeless and it’s difficult to say exactly the number of houses destroyed by the fire.

Kara is a border village between Lagos and Ogun state.