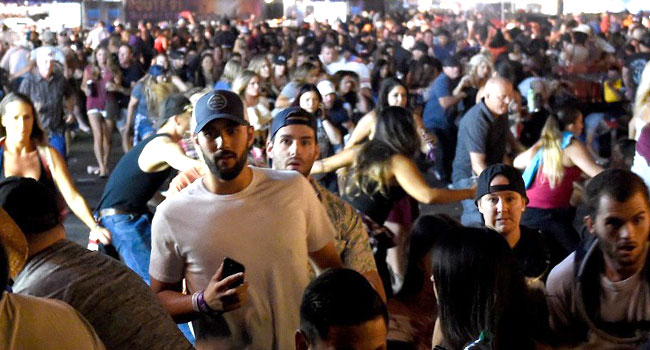 Following the tragic shooting at the crowd in a country music concert in Las Vegas on Sunday, America and the world has continued to express shock.

The tragic incident which killed 60 and injured 500 people has made celebrities take to social media to voice their reaction and heartfelt condolences.

Some of these celebrities are also arguing for greater gun control in the United States.

Jennifer Lopez, Mariah Carey, Celine Dion and Britney Spears, who all have acts lined up in the concert, said they were heartbroken. While Ariana Grande is preaching Love, Unity and Peace.

I ❤️ Las Vegas…feeling so broken this morning

My heart is breaking for Las Vegas. We need love, unity, peace, gun control & for people to look at this & call this what it is = terrorism.

Rihanna wrote: ‘Saying a prayer for all the victims & their loved ones, also for the residents & visitors of Las Vegas! This was a horrific act of terror!!’

Saying a prayer for all the victims & their loved ones, also for the residents & visitors of Las Vegas! This was a horrific act of terror!!

Taylor Swift said, ‘There are no words to express the helplessness and sorrow my broken heart feels for the victims in Vegas and their families,’

Lady Gaga who seems deeply vexed by the attack said, “This is terrorism plain and simple,” while Ava Duvernay said ‘lone wolf’ or ‘killer’ in the American press, but not often as ‘terrorist.’

Nick Jonas express devastation at the news calling for prayers for Vegas while Tyra Banks said her heart is with the victims. John Legend is also heartbroken by the news.

Devastated waking up to the news of the shooting in Las Vegas. Praying for the victims and their families and friends. #PRAYERSFORVEGAS

My heart is with the victims, friends and families that have experienced devastating tragedy in Las Vegas.

The news from Las Vegas is heartbreaking. Devastating.

Reacting to the horrific incident, the Kardashian clan including Kim, Khloe and Kourtney said they sent prayers to the victims. Ariana Grande in her reaction said, “My heart is breaking for Las Vegas’.

Woke up to the most devastating news about Las Vegas. I’m praying for everyone in Las Vegas!

I can't believe this!! The deadliest mass shooting in US history! 😩My sincerest condolences to everybody there! My prayers are with you! 💔