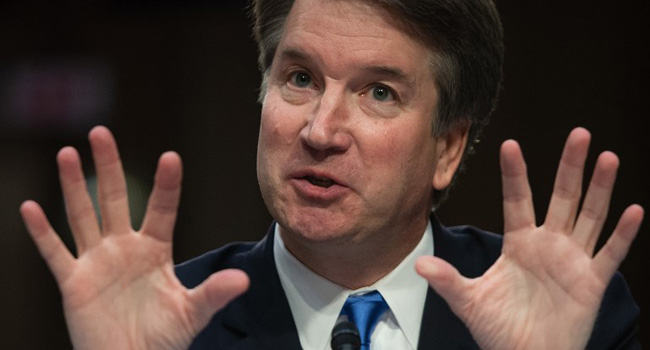 President Donald Trump’s Supreme Court nominee Brett Kavanaugh on Monday launched an aggressive campaign against allegations of sexual misconduct, vowing on national television to clear his name while appearing to claim his virginity at the time of the accusations as a defense.

With pressure mounting to put Kavanaugh’s nomination on hold for the FBI to investigate his past — a day after a second woman came forward with allegations against him — Trump stood firmly behind his embattled nominee, accusing Democrats of working hard to “destroy a wonderful man.”

The claims, dating back to the conservative judge’s high school and college days, threaten to derail what was seen as an all-but-certain confirmation to the lifelong post on the top court.

Instead, he now faces an explosive Senate showdown against the first of his accusers, university professor Christine Blasey Ford, who is set to testify against him Thursday.

With his future and reputation on the line, Kavanaugh stepped up his defense, saying “I’ve never sexually assaulted anyone, not in high school, not ever. I’ve always treated women with dignity and respect.”

He also sought to present an image of himself as a strait-laced student devoted to his studies and sports and declared he was a virgin for much of his youth, apparently as a strategy of defense.

“I’m not going to let false accusations drive us out of this process,” he added, repeatedly calling for a “fair process.”

Trump later tweeted to throw his full weight behind his candidate.

“The Democrats are working hard to destroy a wonderful man, and a man who has the potential to be one of our greatest Supreme Court Justices ever, with an array of False Accusations the likes of which have never been seen before!”

After a dramatic weeklong standoff, Kavanaugh’s accuser Ford finally committed Sunday to be questioned in a public hearing before the Senate Judiciary Committee, which is weighing Kavanaugh’s nomination.

Ford alleges that a drunken Kavanaugh and another boy shut her in a room and tried to tear her clothes off at a high school beer party in suburban Washington around 1982 when she was 15 and he 17.

Just hours later, The New Yorker dropped a new bombshell, reporting that a second woman was accusing the Washington appeals court judge of sexual misconduct, while they were students at Yale University around 1983-84.

Deborah Ramirez, 53, says Kavanaugh exposed himself to her during a party, thrusting his genitals in her face and causing her to touch them without her consent, according to the magazine.

The allegations stand to derail a nomination that Republicans see as crucial to gain conservative control of the high court for years.

They could also play decisively in the November midterm elections, where Republican control of both houses of Congress is under threat.

With emotions running high, dozens of protesters were removed from the US Capitol for unlawfully demonstrating against the judge’s confirmation.

A spokesperson for the Time’s Up movement later issued a statement calling for Kavanaugh to withdraw: “His confirmation would compromise the integrity of the court for generations to come,” he said.

Kavanaugh’s approval was only two weeks ago considered a done deal, with all Republicans in the narrowly divided Senate appearing set to back him.

But the allegations have left some Republican senators — especially two women who have spoken out in the past about sexual abuse of women — under pressure to weigh the accusers’ stories.

Yet Trump’s defiant stance could also stir his Republican base to head to the polls in November, frustrated at what many see as a cynical attempt to sink a qualified nominee.

Kavanaugh argues that no witnesses have yet come forward to corroborate either woman’s account. Both accusers have acknowledged memory lapses, which could weaken their claims.

Democrats say that is all the more reason to halt the nomination process and let the FBI, which carries out background investigations for candidates to high positions, investigate them.

“There is only one way to get to the bottom of these allegations against Judge Kavanaugh and prevent the nation from being thrown into further turmoil: an independent background check investigation by the FBI,” said Senator Chuck Schumer, the senior Democrat in the Senate.