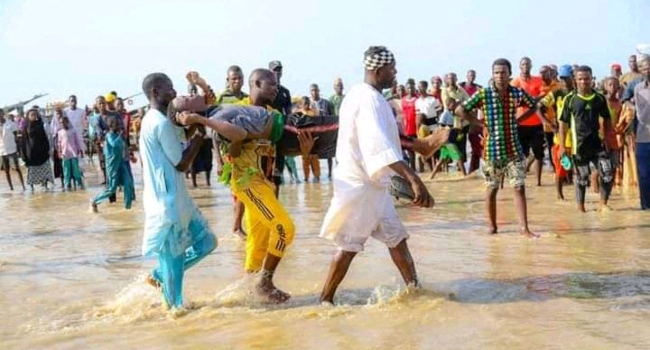 Over 90 bodies have so far been recovered from River Niger in Warrah, in Ngaski Local Government Area of Kebbi State where an overloaded boat with more than 100 passengers capsized.

The Kebbi State Governor, Atiku Bagudu stated this on Saturday night at the Government House in Birnin Kebbi when Sokoto State Governor, Aminu Tambuwal led a high-powered delegation on a condolence visit over the sad incident.

Bagudu who expressed sadness over the development said though the exact number of passengers on board was unknown, testimonies of survival indicated that over one hundred and fifty passengers were on board the boat designed for just sixty passengers.

“Over ninety dead bodies had so far been recovered with 59 of them from Warrah, while 22 were rescued alive,” the governor said.

“The exact number of the passengers in the boat was not known, even as averred. However, some of the survivors said that the ill-fated boat was carrying over 150 passengers which started its journey from Lokon Mina, in Niger State to Warrah, Kebbi State.”

READ ALSO: Over 100 Missing As Boat Capsizes In Kebbi

Speaking during the visit, the Director-General of the Kebbi State Emergency Management Agency, Sani Dododo, also said the state government has decided to come up with measures and review of code of conduct of operations of the commercial boat in the state to guide again future occurrence.

He explained that the government is planning to review maritime operations in the state by ensuring international best practices are adhered to henceforth.

On his part, Governor Tambuwal sympathized with the families of victims and the Kebbi State Government over the sad event.

Tambuwal described the loss as huge not only to Kebbi but to Sokoto State whose people share common traditions, religions, cultures and forefathers.

The governor was in Kebbi in the company of the Speaker, Sokoto State House of Assembly, the Chief Judge, Grand Khadi, Secretary to State Government and several other top government functionaries.

He made a donation of N40 million naira to support the families of the victims.