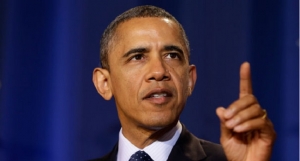 According to Obama’s Spokesman, Kelvin Lewis, neither President Obama nor any White House official ever ordered surveillance on any U.S citizen.

Trump had earlier tweeted that he found out that his predecessor had his ‘wires tapped’ at Trump’s tower just before his victory at the polls.

he tweeted saying: “How low has President Obama gone to tap my phones during the very sacred election process. This is Nixon/Watergate. Bad (or sick) guy!”.

The U.S President has however given no details to back up the claim.