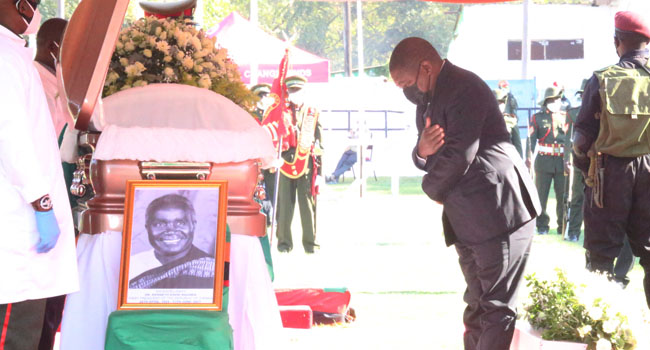 Zambia’s founding leader Kenneth Kaunda was laid to rest at the country’s presidential burial site on Wednesday despite an 11th-hour bid by some of his relatives to block the interment.

Kaunda, who was also a hero of the struggle against white rule in southern Africa, died last month at the age of 97.

Some of his relatives had wanted him buried at his farm next to his late wife Betty, with whom he had 10 children.

But the burial proceeded without incident at Embassy Park, a special cemetery dedicated for the country’s leaders.

His children paid glowing tribute to Kaunda, portraying him as a fighter and teacher whose attributes should be emulated.

“Go well, you fought the good fight of faith, you have finished the race. We will miss you so much,” said one of his daughters, Musata Banda.

“You wanted three more years to get to a hundred, but you will celebrate your 100th birthday in heaven.”

Zambia had already announced three weeks of mouring after his death on on June 17 at the Maina Soko military hospital in Lusaka.

The country goes to presidential and legislative election on August 12.

“We shall move together as ‘one Zambia, one nation’,” he said, reiterating his father’s motto.

“We have elections, let us preach peace. Stop the violence that has been witnessed.”

Outside the cathedral, Lusaka resident Alex Mwale, 19, also seized the moment to appeal for peaceful voting.

“Kaunda as our father stood for peace. This is what our politicians should learn from this man. He was in the same class with great men like Nelson Mandela,” said Mwale. 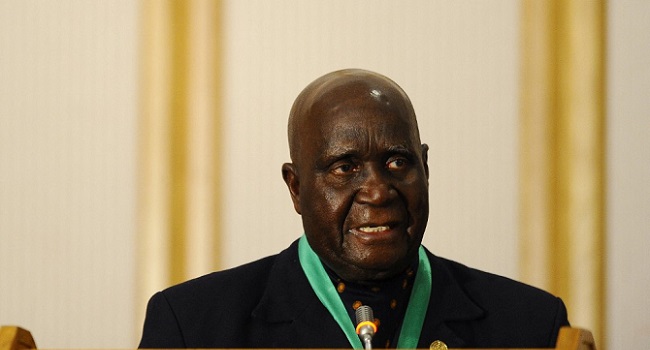 Neatly distanced in compliance with Covid social distancing rules, scores of mourners stood on the terraces, dancing to dirges and solemn music played by a military band.

A hero of the struggle against white rule in southern Africa, Kaunda died on June 17 at a military hospital where he had been admitted with pneumonia.

He always carried a white handkerchief — an item that he said symbolised love and peace, and which he started carrying while incarcerated during the struggle for independence.

A casket draped in the Zambian flag was driven on a gun carriage into the 60,000-capacity National Heroes Stadium and placed under a white marquee.

Kaunda, popularly known by his initials of KK, was president of Zambia for 27 years, taking the helm after the country gained independence in October 1964.

He was nicknamed by some “Africa’s Gandhi” for his non-violent, independence-related activism in the 1960s.

He hosted many of the movements fighting for independence or black equality in other countries around the continent — sometimes at a heavy cost.

But his popularity at home waned as he became increasingly autocratic and banned all opposition parties.

Zambia declared a period of mourning after his death, with flags flown at half mast, while his body was taken around the country for the public to pay their respects.

He will be buried next Wednesday at the country’s presidential burial site situated opposite the cabinet office in Lusaka.

Some taxi drivers in the capital Lusaka drove with their headlamps on as a way of mourning the founding leader.

“We have agreed here that we will be driving with our lights on as a way of mourning Dr Kaunda, shikulu (grandfather). The loss is too huge, not only here in Zambia but the entire world,” driver Lazarus Daka, 37, told AFP.

South Africa has declared 10 days of national mourning for Zambia’s founding president Kenneth Kaunda who died at the age of 97 following a bout of pneumonia, the presidency said Friday.

Zambia under Kaunda was one of the countries most opposed to the apartheid government and for decades hosted the exiled African National Congress (ANC) on its soil.

Kaunda was the first foreign leader South African liberation icon Nelson Mandela visited on his release from prison in 1990.

“In remembrance of this great leader the South African government has declared a period of mourning for 10 days with immediate effect,” said a statement from President Cyril Ramaphosa’s office.

Zambia itself is observing 21 days of national mourning, with flags flying at half-mast and all entertainment banned.

Ramaphosa said Kaunda is a “rightfully revered father of African independence and unity” whose “leadership was a source of inspiration and resilience”.

“Under his leadership, Zambia provided refuge, care, and support to liberation fighters who had been forced to flee the countries of their birth,” said Ramaphosa.

“He stood alongside the people of South Africa at the time of our greatest need and was unwavering in his desire for the achievement of our freedom,” said Ramaphosa.

“We will never be able to repay the debt of gratitude” owed to Kaunda, he added.

In neighbouring Botswana, President Mokgweetsi Masisi has ordered seven days of mourning in honour of the “selfless” Kaunda, an “iconic statesman of the highest credentials”.

Kaunda ruled Zambia for 27 years, taking the helm after the country gained independence from Britain in October 1964.

While in power he hosted many of the movements fighting for independence or black equality in other countries around the region.

Zambia’s first president who ruled for 27 years was confirmed dead following a battle with pneumonia. He was aged 97.

In a statement issued by Garba Shehu, one of his spokesperson, Buhari described Kaunda as someone who showed uncommon love for his country.

The Nigerian leader said the foremost freedom fighter was “one of the greatest African and world leaders of all time who loved his country and people profoundly.”

Buhari equally admitted that Kaunda’s death came as a “great shock because I knew his contributions to the development of not only Zambia but also Africa at large.”

And Buhari who concurred that the late leader was instrumental to South Africa’s independence, noted that “we can’t forget in a hurry how Kaunda gave shelter to anti-apartheid freedom fighters from South Africa and from former Rhodesia.”

The late Kaunda leader, Buhari added, “was one of the loudest voices for the liberation of Africa from colonialism and imperialism and he did so with passion and sincerity. It is impossible to reflect on Kaunda’s legacy without acknowledging his selflessness and passion for service.”

He also condoled with Kaunda’s family and Zambians over the development.

In a terse statement, it said Kaunda, 97, “has been unwell and was admitted to… Maina Soko Medical Centre,” a military hospital in the capital Lusaka. It gave no further details.

Kaunda ruled Zambia for 27 years, taking the helm after the country gained independence from Britain in October 1964.

The statement said Kaunda was asking Zambians and the international community to pray for him “as the medical team is doing everything possible to ensure that he recovers”.

Later in life he regained stature as one of Africa’s political giants, helping to mediate crises in Zimbabwe and Kenya.

Affectionately known as “KK”, Kaunda was the head of the main nationalist party, the left-of-centre United National Independence Party (UNIP).

Kaunda also became an AIDS campaigner, announcing publicly one of his sons had died from the illness.

Also nicknamed “Africa’s Gandhi” for his non-violent, independence-related activism in the 1960s, he charmed mourners at Nelson Mandela’s burial in December 2013.

When organisers attempted to usher him away from the podium after he ran over his allotted time, he drew laughs by saying they were “trying to control an old man who fought the Boers”, or Afrikaners — the white descendants of South Africa’s first Dutch settlers.

The former president of Zambia, Kenneth Kaunda has joined other leaders in paying tribute to the late South African president, Nelson Mandela.

He said that the late former president never discriminated but brought together all the regions in Africa both black and white.

“Mandela believed that once you work together, there will be peace and unity.

“Nelson Mandela followed the commandments of the lord, which says love thy neighbour as thy self.

“He is no more with us in terms of life but he is still our “Madiba sent to us by God,” he said in his emotional tribute.