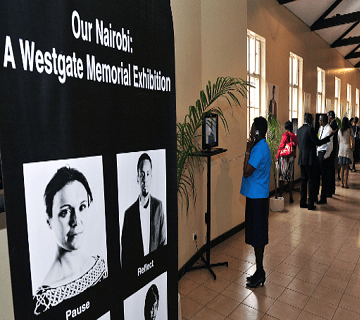 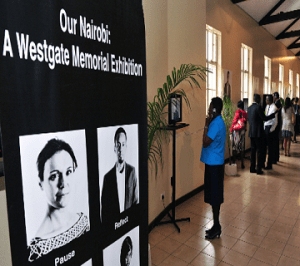 Kenya is marking a year since a handful of Islamic extremists laid a 4-day siege on the Westgate Mall, in Nairobi, killing about 67 people.

The Somali Islamist group, al Shabaab had claimed responsibility for the attack, claiming it was a rebuttal to Kenya’s military operations in Somalia.

The militants had hired a shop at the mall in the weeks leading up to the siege, which gave them access to service lifts, enabling them to stockpile weapons and ammunition.

Having pre-positioned weapons they were able to re-arm quickly and repel the security forces.
A memorial plaque will be unveiled and a candle-lit vigil held.

On Sunday, relatives of the victims will lay wreaths at a garden in the forest where 67 trees were planted after the attack.

Interfaith prayers will also be held at the site.

“We expect the victims’ families and friends to come out and be part of the healing process,” event organiser, Rajesh Shah, was quoted as saying by AFP.

However, the country is on security high alert ahead of the commemorations.

“We are prepared in case of anything. Specialised units are on the ground and we have intensified patrols during this period of the anniversary,” Kenyan police chief, David Kimaiyo, said. 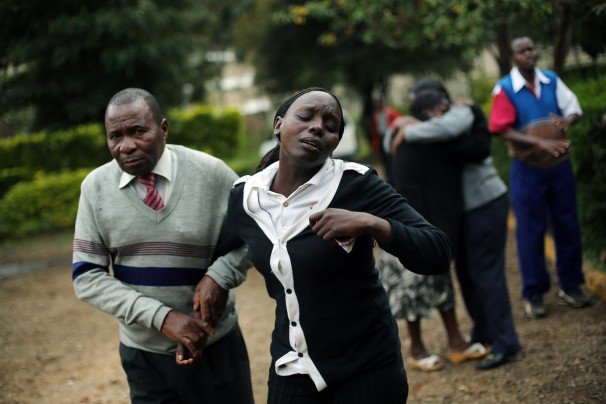 The siege began on Saturday when members of the terrorist group stormed the shopping mall, throwing grenades and shooting at shoppers, including children.

The siege however came to an end after security forces took control of the mall on Tuesday.

In a televised address, President Uhuru Kenyatta said six members of the security forces were among 67 people who had died.

Declaring the siege over, he said five militants had been killed and 11 other suspects arrested.

In his address, Kenyatta praised the response of ordinary Kenyans which he described as “exemplary and overwhelming”.

“We have ashamed and defeated our attackers,” he said. “Kenya has stared down evil and triumphed.”

Although, he did not confirm earlier reports that several of the attackers were American and British, he said that “intelligence reports had suggested that a British woman and two or three American citizens may have been involved in the attack”.

“We cannot confirm the details at present. Forensic experts are working to ascertain the nationalities of the terrorists.”

He promised that justice will be served. “These cowards will meet justice, as will their accomplices and patrons, wherever they are.”

As the clearing of the mall continues, the number of dead is expected to rise.

Several bodies, including those of some attackers, are thought to be trapped under rubble after three floors of the building collapsed following a blaze.

Kenya’s Standard newspaper reported that several bodies were recovered from the building on Tuesday evening. 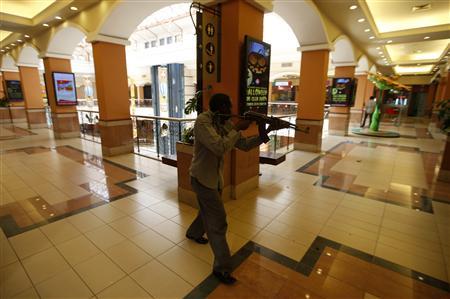 Gunfire and explosions sounded on Monday from the Nairobi mall where militants from Somalia’s al Qaeda-linked al Shabaab group threatened to kill hostages on the third day of a raid in which at least 68 have already died.

Reuters journalists near the upmarket Westgate complex heard sporadic shots and also heavy bursts of rifle fire and muffled blasts on at least two occasions after daybreak. Kenyan troops moved around outside the building. A Kenyan Red Cross official, Abbas Guled, said there had been clashes inside the building.

But there was no indication of the fate of people whom the authorities had said on Sunday were being held by 10 to 15 gunmen – and possibly women – inside a large supermarket.

An al Shabaab spokesman warned that the Islamists would kill hostages if Kenyan security forces, who are being assisted by Western and Israeli experts, tried to storm their position:

“Israelis and Kenyan forces have tried to enter Westgate by force but they could not,” Sheikh Ali Mohamud Rage said in an audio statement posted online. “The mujahideen will kill the hostages if the enemies use force.

Security forces had secured most of the complex by Sunday, freeing many people who had hidden in terror. Though they hoped for a quick solution, rescuing those held will be difficult.

Survivors’ tales of Saturday’s military-style, lunchtime assault by squads of attackers hurling grenades and spraying automatic fire, has left little doubt the hostage-takers are willing to kill. Previous such raids around the world suggest they may also be ready to die with their captives.

In Somalia, Kenya’s northern neighbour devastated by two decades of civil war, al Shabaab have demanded President Uhuru Kenyatta pull out Kenyan troops, who have pushed the militants on to the defensive over the past two years as part of an African Union-backed peacekeeping mission. Kenyatta refused.

It was unclear how many may be held hostage. Colonel Cyrus Oguna, a Kenyan military spokesman, told Reuters that most of those freed in a search and rescue operation on Sunday had not been held by the gunmen but had found places of refuge. He said “a very small number” were still captive, but gave no detail.

“We will not negotiate with terrorists,” he added.

Asked at a news conference on Sunday about whether captives had been wired with explosives, Kenyatta declined comment.

The president, who lost a nephew in Saturday’s killing, vowed to hold firm in the “war on terror” in Somalia and said, cautiously, that Kenyan forces could end the siege.

“I assure Kenyans that we have as good a chance to successfully neutralise the terrorists as we can hope for,” he said. “We will punish the masterminds swiftly and painfully.”

A military spokesman for al Shabaab told Reuters his group had nothing to fear. “Where will Uhuru Kenyatta get the power with which he threatened us?” said Sheikh Abdiasis Abu Musab.

It was unclear who the assailants were. Al Shabaab – the name means “The Lads” in Arabic – has thousands of Somali fighters but has also attracted foreigners to fight Western and African Union efforts to establish a stable government.

A London man, Jermaine Grant, faces trial in Kenya for possession of explosives. Police suspect an al Shabaab plot to attack restaurants and hotels used by Westerners and have been hunting for another Briton, Samantha Lewthwaite, the widow of a suicide bomber who took part in the London 7/7 attacks of 2005.

Some British newspapers speculated on the role the “White Widow” might have played at Westgate. The term “black widow” has been used by Chechen militants in Russia for women taking part in bombings and assaults after the deaths of their husbands.

With the stocks of a major supermarket at their disposal – the Nakumatt store is part of one of Kenya’s biggest chains – the gunmen could be in a position to hold on for a long time.

British Prime Minister David Cameron, confirming that at least three Britons were already among the dead, said: “We should prepare ourselves for further bad news.”

U.S. President Barack Obama called Kenyatta to offer condolences and support. Israel, whose citizens own stores in the Israeli-built mall and have been targeted by Islamists in Kenya before, said Israeli experts were also helping.

Foreigners, including a French mother and daughter, and two diplomats, from Canada and Ghana, were killed. Ghanaian Kofi Awoonor was a renowned poet. Other victims came from China and the Netherlands. Five Americans were wounded.

Kenya’s president, son of post-colonial leader Jomo Kenyatta, is facing his first major security challenge since being elected in March.

The assault was the biggest single attack in Kenya since al Qaeda’s East Africa cell bombed the U.S. Embassy in Nairobi in 1998, killing more than 200 people.

Judges at the International Criminal Court adjourned the trial of Kenyan Vice President William Ruto for a week, granting his request to return home to help deal with the crisis.

He and Kenyatta face charges of crimes against humanity for their alleged role in coordinating deadly violence after the contested 2007 elections, when they ran in rival camps. Both deny the charges. They won a vote on the same ticket in March.

Al Shabaab’s siege underlined its ability to cause major disruptions with relatively limited resources, even after Kenyan and other African troops drove it from Somali cities.

“While the group has grown considerably weaker in terms of being able to wage a conventional war, it is now ever more capable of carrying out asymmetric warfare,” said Abdi Aynte, director of Mogadishu’s Heritage Institute of Policy Studies.

After emerging on Sunday morning from a hiding place under a vehicle in the basement car park, a woman, giving her name as Cecilia, told Reuters she had seen three of the attackers.

“They were shooting from the exit ramp, shooting everywhere,” she said. “I saw people being shot all around me, some with blood pouring from bad wounds. I was just praying, praying ‘God, keep me alive’ and that my day hadn’t come.”

Witnesses said the attackers had AK-47 rifles and wore ammunition belts. One militant was shot and arrested early on in the siege, but died shortly afterwards.

For hours after the attack, the dead were strewn around tables of unfinished meals. At one burger restaurant, a man and woman lay in a final embrace, until their bodies were removed.

Kenya sent troops into Somalia in October 2011 to pursue militants whom it accused of kidnapping tourists and attacking its security forces. 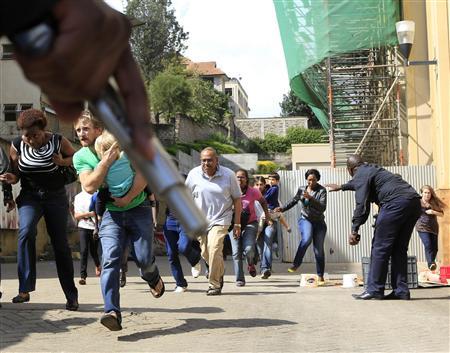 A senior figure in the Somali militant group al-Shabab has told the BBC it carried out a deadly attack on a shopping centre in neighbouring Kenya.

Al-Shabab, which has links to al-Qaeda, said the attack was in response to Kenya’s presence in Somalia, where its troops have been fighting the militants since 2011.

A senior Kenyan security official has put the death toll at 11.

However, the Red Cross says at least 30 people were killed and dozens injured.

Previous Report: The U.S. State Department said on Saturday it had reports that American citizens were injured in an attack when gunmen stormed a shopping mall in the Kenyan capital, Nairobi, and it condemned the shooting as a “senseless act of violence”.

“We have reports of American citizens injured in the attack, and the U.S. Embassy is actively reaching out to provide assistance,” State Department spokeswoman Marie Harf said in a statement.

She declined to give details of the Americans injured citing privacy considerations.