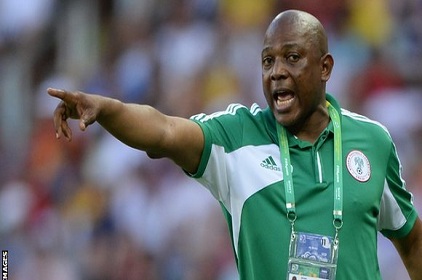 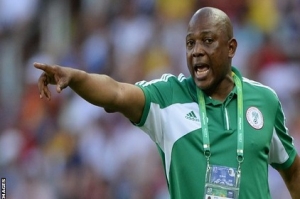 Coach Stephen Keshi has insisted that he is not thrilled about his record as the first African to lead an African team to the FIFA World Cup second round, rather he wants the Super Eagles to do well against France for a place in the quarter finals of Brazil 2014.

Keshi, who became the first black African coach to win the African Cup of Nations in 21 years against all odds, helped the Super Eagles to secure a place in the round of 16 for the first time since France 98.

There have been suggestions in some quarters that Keshi’s achievements in winning the Nations’ Cup and taking his team to the knock-out stage of the World Cup have not been given the value it should by the international media.

However, Keshi believes what is important to him is to focus on the game against France and not his personal glory, “For me, my team and country come before any personal glory.

“What is important is to focus on what lies ahead – not Stephen Keshi and his record.

“That we made the second round and are able to achieve this against all odds is all that matters”, the former coach of Mali said.

Nigeria will face France for only the second time at senior level in the ongoing 2014 FIFA World cup on Monday in Brasilia and the Super Eagles aim to equal Africa’s all-time best of getting to the quarterfinals of the World Cup achieved by Cameroon, Senegal and Ghana in 1990, 2002 and 2010.

Keshi said that this was enough motivation and the Super Eagles would give it all it takes to edge France in reaching the last 8 of the football competition.

“We are not bothered about the past but only interested in this present day.

“My boys know what I expect and our opponents will not make life easy for them.

“The Super Eagles have never made it to the quarterfinals, so they can make history of their own.

“There’s no motivation bigger than that”, Keshi added.

The last time Nigeria met France was in an International friendly in Saint Etienne in June 2009 with Super Eagles beating France 1-0, courtesy of a Joseph Akpala goal, but Keshi says it would be a different ball game against the Le Blues on Monday.