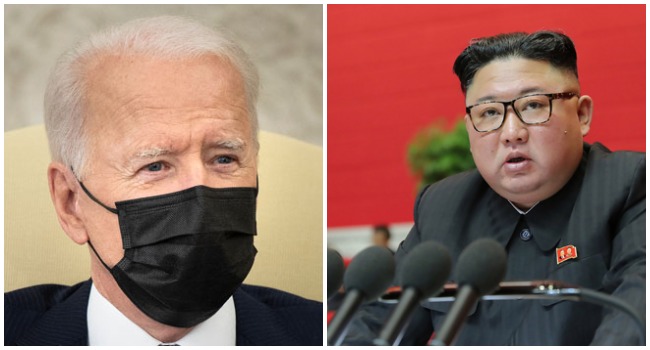 North Korea on Sunday accused US President Joe Biden of pursuing a hostile policy, dismissing “spurious” American diplomacy and warning of a response.

Biden had said Wednesday that his administration would deal with the threat posed by Pyongyang’s nuclear programme “through diplomacy as well as stern deterrence”.

The White House said Friday that the president was open to negotiations with North Korea on denuclearisation following the completion of a policy review, but Pyongyang said Biden had made a “big blunder”.

“His statement clearly reflects his intent to keep enforcing the hostile policy toward the DPRK as it had been done by the U.S. for over half a century,” Kwon Jung Gun, a foreign ministry official, said in a statement released by the official KCNA news agency.

“The U.S.-claimed ‘diplomacy’ is a spurious signboard for covering up its hostile acts, and ‘deterrence’ touted by it is just a means for posing nuclear threats to the DPRK,” Kwon added, using the official name of North Korea.

“Now that what the keynote of the U.S. new DPRK policy has become clear, we will be compelled to press for corresponding measures.”

The White House said Friday that its goal remains “the complete denuclearisation of the Korean peninsula”.

Biden’s press secretary Jen Psaki gave little indication of what kind of diplomatic initiative this could entail but suggested that the president had learned from the experience of his predecessors, who struggled to deal with North Korea’s leadership and its nuclear weapons programme.

But Psaki said Washington would not “focus on achieving a grand bargain”, apparently referring to the kind of dramatic over-arching deal that former president Donald Trump initially suggested was possible when he met with North Korea’s leader Kim Jong Un.

Neither would the White House follow the more standoffish approach espoused by Barack Obama, she added.

In a separate statement through KCNA Sunday, North Korea also accused the United States of insulting its leadership and its anti-coronavirus measures, referring to a State Department press release on April 28.

State Department spokesman Ned Price had issued a statement that day criticising North Korea’s human rights abuses and draconian Covid-19 curbs, describing it as “one of the most repressive and totalitarian states in the world”.

“The ‘human rights issue’ touted by the U.S. is a political trick designed to destroy the ideology and social system in the DPRK,” the North Korean foreign ministry said in the statement.

And in a third statement issued Sunday, Kim Jong Un’s powerful sister Kim Yo Jong lashed out at South Korea over a recent anti-Pyongyang leaflet campaign by a defector group.

Activist groups have long sent flyers critical of the North Korean leadership over human rights abuses and its nuclear ambitions across the Demilitarized Zone dividing the peninsula, either flying them by hot air balloon or floating them across rivers.

The leaflets have infuriated Pyongyang, which issued a series of vitriolic condemnations last year demanding Seoul take action and upped the pressure by blowing up an inter-Korean liaison office on its side of the border.

The South Korean parliament rapidly passed a law criminalising the leaflet campaigns in December, raising concerns over freedom of speech.

But a defector group said it flew 500,000 leaflets near the DMZ last week in defiance of the law.

Kim Yo Jong blamed South Korean authorities for not stopping them.

“We regard the maneuvers committed by the human wastes in the south as a serious provocation against our state and will look into corresponding action,” she said. 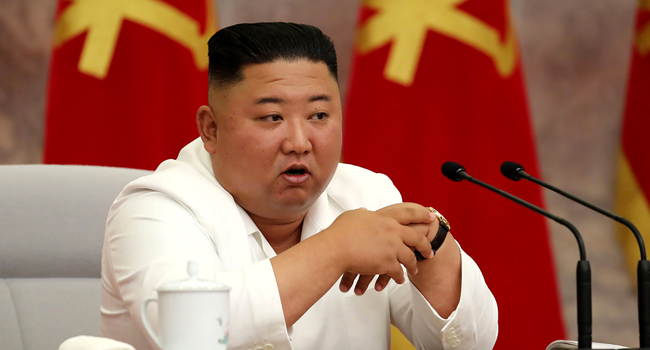 The move is likely to infuriate the nuclear-armed North, which has repeatedly condemned South Korea in recent months, including directing personal insults at President Moon Jae-in.

Seoul Central District prosecutors received a criminal complaint against Kim Yo Jong from a Seoul-based lawyer and had started an investigation, a spokeswoman told AFP.

Last month, Pyongyang blew up an inter-Korean liaison office on its side of the border, days after Kim Yo Jong — one of her brother’s closest advisers — had said the “useless” property would soon be seen “completely collapsed”.

Before the demolition, it had issued a series of vitriolic condemnations of South Korea over anti-North leaflets that defectors send back across the heavily-militarised border — usually attached to balloons or floated in bottles.

It raised pressure further by threatening military measures against Seoul, but later said it had suspended those plans in an apparent sudden dialling-down of tensions.

In his complaint, lawyer Lee Kyung-jae claimed the now-demolished liaison office was South Korean property as it was renovated using South Korean government funds, despite its being located in the North.

Kim “used explosives to destroy” the South’s “quasi-diplomatic mission building that served the public interest”, he said in the complaint.

Lee also filed a complaint against Pak Jong Chon, chief of the general staff of the North Korean military.

Under South Korea’s criminal code, he stressed, damaging property or disturbing the peace using explosives was punishable by death, or a prison sentence of at least seven years.

Capital punishment remains on the statute books in South Korea, although it has not executed anyone since 1997.

In practice, it would be virtually impossible for Seoul officials to punish Kim Yo Jong or Pak, but Lee told the South’s Yonhap News Agency that he wanted to “inform the North Korean people of their leader’s hypocrisy”.

The announcement came a week after a Seoul court ordered Pyongyang’s leader to compensate prisoners of war who spent decades in North Korea, in a move that could set a far-reaching legal precedent on the divided peninsula.

Inter-Korean relations have been strained following the collapse of a summit in Hanoi between Kim Jong Un and US President Donald Trump early last year over what the nuclear-armed North would be willing to give up in exchange for a loosening of sanctions. 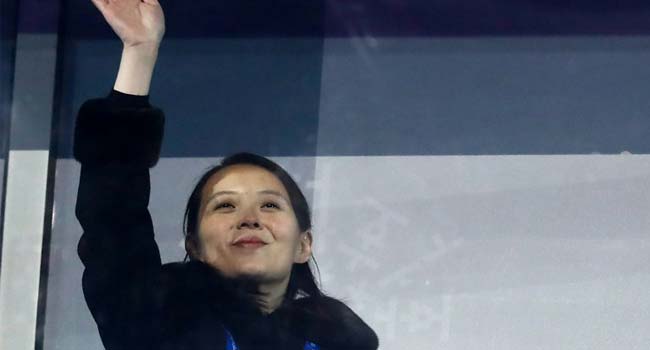 A friendly face promising better times, or a mask to conceal a brutal dictatorship? South Koreans are divided on Kim Yo Jong, the sister of the North’s leader, and her landmark visit to their country.

The first member of the North’s ruling dynasty to set foot in the South since the end of the war, Kim has been an instant object of fascination for South Korean and global media since she rode down the escalator at Incheon airport on Friday, calmly surveying the scene.

She shook hands several times with the South’s President Moon Jae-in, cheered a unified ice hockey team with him, and conveyed her brother’s invitation to a summit in Pyongyang.

Every detail of her visit as the key member of a diplomatic delegation to the South’s Winter Olympics has been scrutinised, from the clothes she wore and her facial expression to the bag she was carrying and even her handwriting.

One calligraphy expert described her as “positive, upbeat and very goal-oriented” based on the precisely angular, somewhat girlish script she left in the guestbook at the South’s presidential Blue House.

Her brother — the third generation of her family to rule the isolated and impoverished North — will be pleased with her international diplomatic debut, said Yang Moo-Jin, professor at the University of North Korean Studies at Seoul.

“Kim kept smiling but at the same time was rarely seen having her head down during the visit, even to our president,” he said. “So maybe Kim Jong Un must be applauding at home.”

But reactions among ordinary South Koreans have been more mixed.

“They fired missiles until recently and conducted a nuclear test before suddenly launching this peace campaign,” businessman Kim Byoung-gwan told AFP. “I don’t trust it.”

Others questioned the attention devoted to her.

“All the media in the South and the around the world are going gaga about Kim Yo Jong,” said one commentator online.

“Looks like they would soon join the North’s propaganda media to worship and idolise her.”

Moon has long pushed engagement with the North — which is accused of widespread human rights abuses and subject to multiple sets of UN sanctions over its banned nuclear and ballistic missile programmes — to bring it to the negotiating table.

His approval ratings have fallen since the deal for the North to take part in the Games was struck, with the decision to field a unified women’s ice hockey team proving particularly controversial.

But one of the most widely welcomed moments of Kim Yo Jong’s visit was when both she and the North’s ceremonial head of state Kim Yong Nam stood as the South’s flag was raised and anthem played at the Olympics opening ceremony in Pyeongchang.

“I hate Moon and I hate the North,” read an online comment. “But the scene was undeniably impressive. I hope the action came from sincerity for peace, not a fake gesture.”

Educated in Switzerland like her brother, Kim Yo Jong has risen rapidly up the ranks since he inherited power from their father Kim Jong Il, and she is now one of his closest confidantes in a country where elite politics have always been a family affair.

Officially she is first vice department director of the Central Committee of the ruling Workers’ Party, and has a position in its important propaganda operations.

But professor Yang explained her most vital role: “She is one of a very few people who can talk freely about anything with the leader Kim.”

Believed to be aged 30, her existence was barely known to the wider world until Kim Jong Il’s funeral in 2011, when she was seen standing right behind her brother on state television, looking tearful and ashen-faced.

She demonstrated a very different demeanour on her visit than the “deferential” one she does in the North, said Korean Peninsula Future Forum analyst Duyeon Kim.

Beyond the Olympic imagery of togetherness and unity, many South Koreans are openly sceptical.

“The Kim family is a grandmaster of disguise,” said one.

Another declared: “Look at that girl acting like a well-behaving princess. No matter how nice she acts, nothing can sugarcoat all the human rights atrocities under her and her family.”