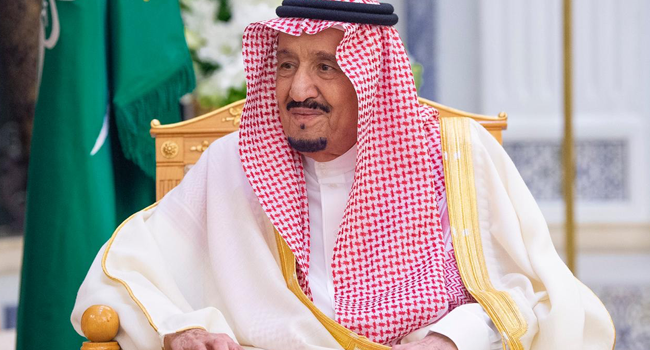 It is rare for Saudi Arabia to report on the health of the ageing monarch, who has ruled the top oil exporter and the Arab world’s biggest economy since 2015.

The king was “admitted today to King Faisal specialist hospital in Riyadh for some medical tests due to cholecystitis,” inflammation of the gall bladder, the royal court said in a statement released by the official Saudi Press Agency.

The announcement made around 4:30 am (0130 GMT) did not disclose any further details.

Iraqi Prime Minister Mustafa al-Kadhemi’s scheduled visit to Saudi Arabia, which was due to start on Monday, has been postponed after the king’s hospitalisation, according to the Saudi foreign minister.

“In recognition of the extremely important visit and a desire to make it a success, our wise leadership in coordination with our brothers in Iraq have decided to postpone the visit” until the king leaves hospital, Foreign Minister Prince Faisal bin Farhan wrote on Twitter.

Hours before Kadhemi was to set off on his first trip abroad as premier, his office said they heard King Salman was suffering from “a sudden health issue”.

“It was decided to postpone the visit to the earliest possible date agreed upon by the two sides,” his office said in a statement.

The delegation is set to return to Baghdad after the meetings wrap up on Monday afternoon.

Under the king’s rule, Saudi Arabia launched ambitious economic reforms for a post-oil era and gave more rights to women, but also adopted a more assertive foreign policy and entered a war in neighbouring Yemen.

King Salman took the throne after the death of his half-brother Abdullah, who was around 90 years old.

In 2017, Saudi Arabia dismissed reports and mounting speculation that the king was planning to abdicate in favour of his young son, Crown Prince Mohammad bin Salman, who is widely seen as the de facto ruler.

“There is no possibility whatsoever that the king will abdicate,” an unnamed Saudi official told Bloomberg News, adding that Saudi kings usually remain in power even when poor health prevents them from carrying out their responsibilities.

Prince Mohammed’s meteoric rise to power has coincided with a sweeping crackdown on critics and dissenters, as well as royal family members.

Saudi Arabia has been engulfed by a series of controversies since he was named crown prince and heir to the throne in June 2017.

That includes the brutal October 2018 murder of royal insider-turned-critic Jamal Khashoggi by Saudi agents at the kingdom’s consulate in Istanbul. 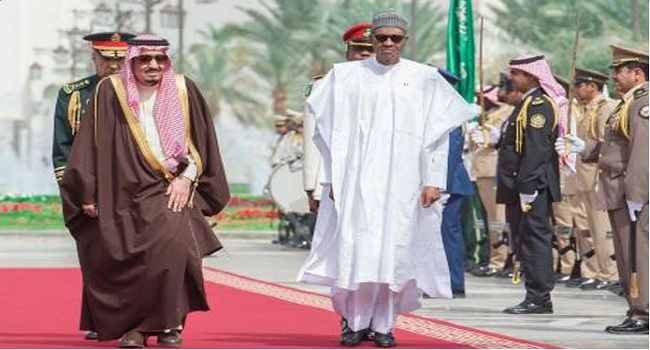 President Muhammadu Buhari has reiterated Nigeria’s support for the Kingdom of Saudi Arabia and its efforts to stop the spread of terror in the Middle East.

President Buhari said this on Tuesday at a meeting with King Salman Bin Abdul-Aziz in Riyadh, where the two leaders engaged in extensive discussions on regional and global issues.

President Buhari, who was making his first pronouncement on the invitation to join the coalition of Islamic States against terror, congratulated the kingdom of Saudi Arabia on its formation.

“Even if we are not a part of it, we support you. I must thank the Kingdom of Saudi Arabia for the recent creation of a coalition to address the menace of international terrorism.

“Nigeria will support your efforts in keeping peace and stopping the spread of terror in your region. This is in consonance with our own commitment and ongoing efforts in seeking to stamp out Boko Haram terrorists from the West African sub-region and Lake Chad Basin Commission (LCBC),” the President said.

Problem Of Terrorism
Speaking on global terror generally, President Buhari stressed the need for various nations to come together to tackle the menace.

“International terrorism made a statement by attacking one of the advanced countries by carrying out an attack on Paris in which 130 were killed. Now we have to come together to find a common solution to the problem of terrorism,” he said.

The President also thanked the Saudi government for its continuing support to Nigeria in the fight against terrorism.

President Buhari regretted that the late Libyan leader, Muammar Ghaddafi, recruited, trained and armed citizens of many states in the Sahel region, lamenting that with Ghaddafi’s fall, these mercenaries have returned to their countries, “doing nothing but to shoot and kill”.

He cited Burkina Faso and Mali as the main victims but expressed happiness that the countries neighbouring the Lake Chad have tightened their ranks to finish off the Boko Haram threat.

“Luckily, we have cultivated our neighbours. We are now working together against Boko Haram, otherwise the problem would have become worse,” he said.

In his remarks, King Salman commended the progress made by Nigeria in combating terrorism and promised to give further support and assistance.

He welcomed the support of the Nigerian government for the new anti-terrorism coalition and implored President Buhari to consider its full membership.

King Salman also pledged his full support and cooperation to Nigeria under its present leadership and directed all agencies of his government to follow up on the discussions.

“I now instruct my team to go and sit down with your relevant agencies to push forward cooperation between our states,” he said.

President Buhari and King Salman expressed hope that the Libyan factions would soon see reason to reunite and restore fully their own country so as to save the world from further terrorism spin-offs from that country.

Both leaders expressed commitment to a stable oil market and a rebound of oil prices.

They also focused on trade between their states and agreed to give fresh impetus to the joint commission previously established in order to boost commercial and other activities to unify their citizens.

The two leaders “committed themselves to doing all that is possible to stabilize the market and rebound the oil price”, Garba Shehu said in a statement.

The two leaders accepted the fact that their two economies are tied to oil, adding that all cannot be well with both countries when the world oil market is unstable, he added.