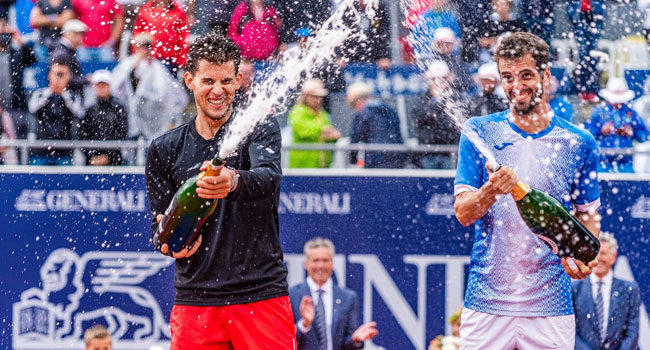 Top seed and world number four Dominic Thiem captured his 14th career title and first on home ground on Saturday with a 7-6 (7/0), 6-1 win over Spain’s Albert Ramos-Vinolas in the final of the Kitzbuhel clay-court tournament.

It was Thiem’s third title of 2019 after a maiden Masters win at Indian Wells and in Barcelona on the eve of Roland Garros where he eventually went on to finish runner-up to Rafael Nadal for a second successive year.

Thiem, who lost the 2014 Kitzbuhel final to David Goffin, becomes only the second Austrian player to lift his home title following former world number one Thomas Muster in 1993.

“It’s already one of my most beautiful moments ever in my tennis career,” said Thiem.

“It was one of the most emotional moments because I have a special connection with Kitzbuhel. I was here for the first time when I was six on this huge centre court. I was watching the tournament many times.

“I got my first wild card here and now to finish the tournament as the champion is incredible. I reached one big childhood goal today.”

Next up for Thiem is a return to hard courts and the Montreal Masters from next week where he starts as second seed to Nadal after the withdrawals of Novak Djokovic and Roger Federer.

The 25-year-old will face either 2017 Montreal semi-finalist Denis Shapovalov or Frenchman Pierre-Hugues Herbert in his Canadian opener.