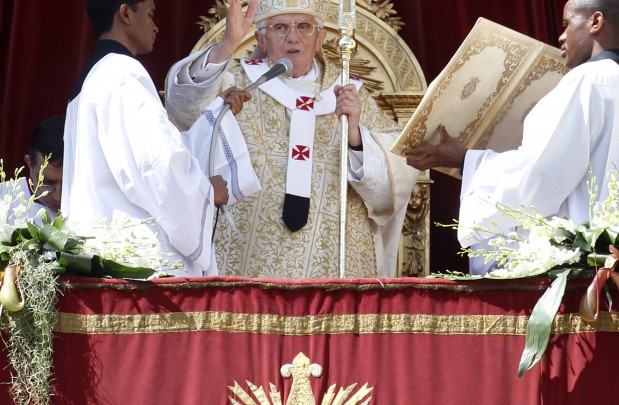 Pope Benedict XVI on Sunday appealed for peace in the world’s trouble spots during his Easter message, but one of the holiest days for Christians was marred by fresh violence in Nigeria and Syria.

Speaking before a crowd of 100,000 in Vatican City’s St. Peter’s Square, the pope called for an end to the bloodshed in Syria where fighting continues to claim lives.

“Particularly in Syria, may there be an end to bloodshed and an immediate commitment to the path of respect, dialogue and reconciliation, as called for by the international community,” he said.

The pontiff also voiced hope that the thousands of refugees fleeing the crisis were given help to relieve “their dreadful sufferings.”

Pope Benedict XVI’s comments came as UN peace envoy Kofi Annan said he was shocked at the “unacceptable” escalation of violence in Syria, where 130 people were killed on Saturday in one of the bloodiest days since protests against President Bashar al Assad’s regime erupted in March last year.

At least 11 more people were killed on Sunday as Mr Assad’s regime insisted it would not pull out from cities in Syria unless there were written guarantees from rebels.

Turning to Iraq, the pope encouraged people to “spare no effort in pursuing the path of stability and development,” while also urging Israel and the Palestinians to “courageously take up a new the peace process.”

He also called for peace and stability to return to Mali after a military coup last month and condemned the “savage terrorist attacks” on Christian churches in Nigeria.

“To Nigeria, which in recent times has experienced savage terrorist attacks, may the joy of Easter grant the strength needed to take up anew the building of a society which is peaceful and respectful of the religious freedom of its citizens,” the pope said.

His words came as at least 20 people were killed in northern Nigeria after a car bombing outside a Christian church while an Easter service was being held inside.