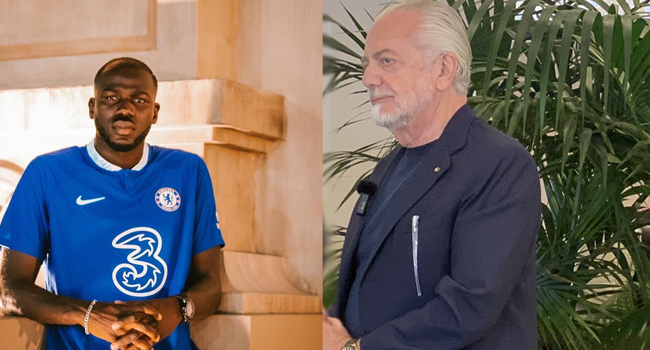 New Chelsea signing Kalidou Koulibaly has insisted he will never let anyone stop him from playing football for Senegal.

The Senegal captain said African nations deserved more respect after the president of his former club, Napoli, said he would only sign African or South American players willing to miss competitions with their national teams.

“Don’t talk to me about Africans anymore,” Napoli president Aurelio de Laurentiis told business website Wall Street Italia. “I wish them well, but either they sign a waiver for the African Cup or else…Between that tournament and the World Cup qualifiers in South America, these players are never available!”

But Senegal captain Koulibaly, who led his country to the Africa Cup of Nations title earlier this year before joining Chelsea in a reported £34 million ($41 million) move from Serie A side Napoli was unimpressed.

“Nobody ever told me not to go to AFCON or something like this,” said Koulibaly during a news conference Wednesday.

“Maybe sometimes they try to ask my manager or something like this.

Koulibaly, who has signed a four-year contract with Chelsea following the purchase of the club by US businessman Todd Boehly’s consortium, added: “Nobody can tell me not to go to my national team. I have a lot of love for my national team, the team that I play for.

“So, if someone told me to do that, it would be the only time that I can fight with somebody.

“The way we feel all the time with my national team, we are all respectful, we wait for players to come from the Premier League, and everybody is happy to be here.

“Everybody thinks the same as me in the national team. If someone told them not to come they would always fight to come.

“This is the most important thing. Everybody has to give us respect.”

Koulibaly will bolster a defence now without Antonio Rudiger and Andreas Christensen after they each left Stamford Bridge.

He will wear the number 26 shirt made famous by Chelsea great John Terry having sought permission from the Blues legend.

“I called John and at the beginning he didn’t believe it was me, he thought it was a joke,” Koulibaly explained. “So he called the team manager to ask if it was really me.

“And when he said yes I was very happy, because I know what he did for the club and for the supporters here.

“I wanted to tell everybody that I asked him before, because I didn’t want to disrespect a legend of the club.”