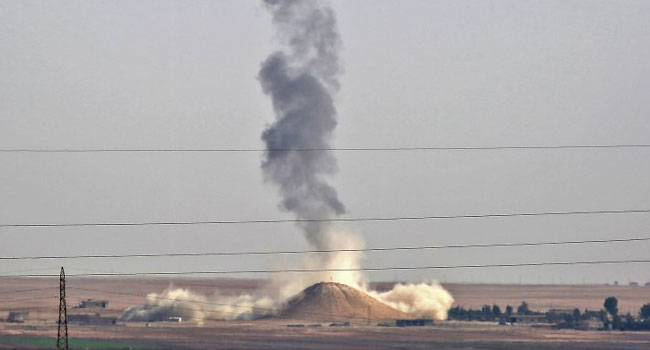 Air strikes by the US-led coalition killed 13 jihadist fighters and 14 of their relatives Friday in eastern Syria, a war monitor said.

The strikes came two days after US President Donald Trump’s decision to pull troops out of Syria raised fears the Islamic State group would use the vacuum to regroup.

“At least 27 people were killed this morning in Al-Shaafa,” Rami Abdel Rahman, the head of the Britain-based Syrian Observatory for Human Rights, told AFP.

He said eight children were among the 14 civilian victims and added several people were seriously wounded in the strikes.

READ ALSO: US Military Signs Trump’s Order To Pull Out Of Syria

The raids targeted IS positions in Al-Shaafa, one of the two main villages in the last pocket of territory still controlled by IS in the Euphrates River valley.

Close to 1,000 IS fighters have been killed since Kurdish-led forces, backed by coalition air strikes, launched an operation on that pocket in September.

Trump said he was ordering a withdrawal of the estimated 2,000 US troops in Syria because IS had been defeated, an assessment rubbished by many, including in his own camp.

On Friday, the leadership of the Kurdish force that has spearheaded the fight against IS warned it might have to pull back from the anti-jihadist front if a US withdrawal invites a Turkish military assault against them.

According to the Observatory, 545 members of the Kurdish-led Syrian Democratic Forces were killed battling IS since the start of the operation on September 10.