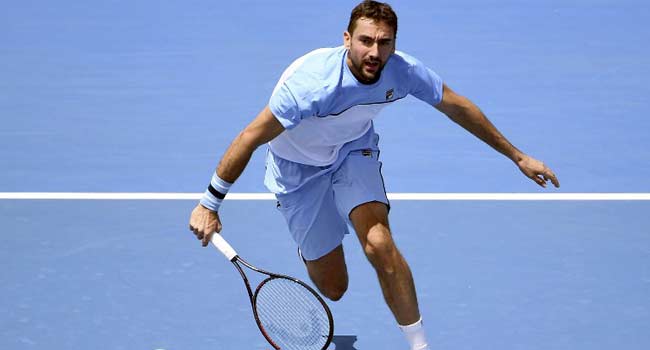 World number seven Marin Cilic tested a knee injury with the best possible result on Wednesday, but temperamental Nick Kyrgios’ poor start to the season continued at the Kooyong Classic.

The wait was worth it as he posted a gritty 6-3, 4-6, 15-13 win over Kevin Anderson, recovering from 2-7 down in the new final-set tiebreaker that will be used at the Australian Open for the first time next week.

Under the rules, the first player to win at least 10 points by a two-point margin takes the match.

Cilic, who was beaten by Roger Federer in an epic Australian Open final last year, said his knee was not a worry.

“The knee felt slightly more stiff than usual, maybe that’s from a first match,” he said.

“I need a few more days to play and train and hopefully reach 100 percent.”

Cilic added: “It took me some time to recover from the emotional end to last season with the Davis Cup.

“I’m feeling a bit rusty, but I’m hitting the ball well and feel on good form.”

South African world number six Anderson was battling jetlag after arriving in Melbourne following a title victory at the weekend in Pune, India.

He is also relaxed about his form heading into the first Grand Slam of the season next week.

“It’s good to play a competitive match, it’s the best way to acclimatise,” he said.

“I want to be as healthy and fresh as possible heading into next week. This is my eighth match of the season, so I’m not worried about that.”

Kyrgios, who was knocked out in the second round at Brisbane last week, was beaten 6-3, 6-4 by friend and fellow comeback candidate Bernard Tomic in an all-Australian battle.

Tomic ended his victory with a flourish, sending over a sneaky serve on match point by hitting the ball between his legs for a winner — a move which totally caught Kyrgios off guard.

“It was a lot of fun just to get back out there,” the often edgy Kyrgios, who has slipped to 51 in the world, said. “It’s great to see a good mate like Bernie having success again.”

The crowd-pleasing tune-up for the Australian Open was marked by good-natured competition.

Tomic, who has been through many of the same dips and dives in his motivation and form as Kyrgios, was also pleased with how he is progressing.

“It was another good training day. Nick and I have played so many times at practice, we know exactly what the other is going to do — it’s a little bit like cheating,” the 83rd-ranked Tomic joked.

“It was good to get out on the court. I didn’t play a lot of tennis last year — which was my own fault. But at the moment I’m happy, the last three months (of 2018) was good.” 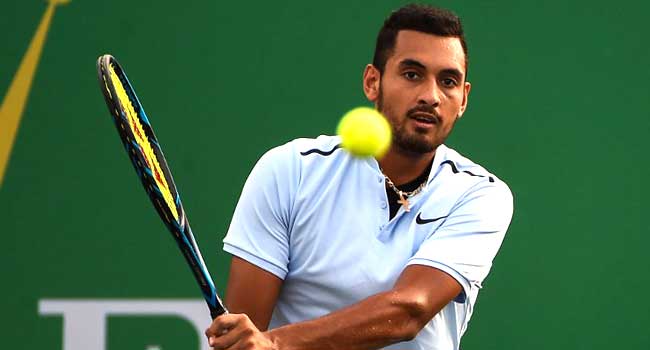 A week before the start of the Australian Open, in-form Nick Kyrgios moved up four places to 17th following his victory in the Brisbane International tournament on Sunday.

South Africa’s Kevin Anderson moved up three places to 11th after reaching the final in Pune while Rafael Nadal held onto top spot ahead of Roger Federer.

Australian firebrand Nick Kyrgios apologised and said he had been unwell after he stormed off court to loud boos midway through his opening match at the Shanghai Masters on Tuesday.

The 22-year-old issued a statement following his abrupt exit after losing the first set 7/5 on a tie break to the American Steve Johnson, having been docked a point for the second match running because of his conduct.

The ATP Tour said it had launched an investigation and Kyrgios, similarly hit with a point penalty in losing the China Open final to Rafael Nadal on Sunday, said he was “gutted” to retire against Johnson.

A member of Kyrgios’s coaching team told AFP in Shanghai as the player exited the arena that the world-ranked 21 had injured his shoulder.

Hours later Kyrgios, whose undoubted talent has often been betrayed by his quickfire temper, made a statement on Twitter apologising.

“I’ve been battling a stomach bug for the past 24 hours and I tried to be ready but I was really struggling on the court today, which I think was pretty evident from the first point,” he wrote.

“My shoulder started to hurt in the practice today, which didn’t help either, and once I lost the first set I was just not strong enough to continue because I’ve not eaten much the past 24 hours.”

The Australian 13th seed said he will make a decision on Wednesday as to whether he takes part in his doubles match the same day with Frenchman Lucas Pouille.

Kyrgios hit a low point in Shanghai a year ago when he similarly left the court to jeers, having rowed with the crowd and appeared to give up in his match against Germany’s Mischa Zverev. Kyrgios was consequently suspended.

The temperamental Kyrgios did look in discomfort with his shoulder early on in the match against the unseeded Johnson.

But he seemed untroubled by the injury when they entered the first-set tie break, but like in the final in Beijing, his temper soon got the better of him, after he was angered by the unsettled crowd and the umpire.

He began Tuesday’s match on his best behaviour but showed a first flash of irritation towards the end of the set, blasting a ball out of the court after he disagreed with a call.

Kyrgios and Johnson were both comfortable on their serves and they went into the tie break with signs Kyrgios was beginning to lose his cool.

He went 3-0 up in the tie break but as Johnson pegged him back he was irked by spectators in the close-knit arena getting up between points.

“What’s happening here?” he asked, before muttering: “Exactly why I shouldn’t come here.”

Kyrgios appeared to blame the umpire for failing to get the spectators in line and his afternoon spiralled fast when he received a point penalty.

“What is he doing? Is this normal?” Kyrgios asked somebody in the official area of the arena, where spectators and players are in close proximity.

“Poor officiating again,” Kyrgios then complained, and added: “Sick of this place.”

Johnson wrapped up the set and Kyrgios decided he had had enough, shaking the hands of his opponent and the umpire — though not looking him in the eye — and packing his bag and leaving.

“I’m gutted to be honest as I was keen to keep the good momentum that I built up in Beijing going and finish the year strong,” Kyrgios added in his statement. 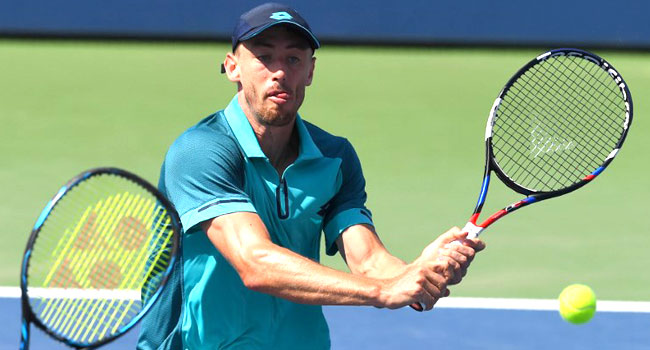 Australia’s Nick Kyrgios, coming off his biggest career final, crashed out of the US Open on Wednesday after hurting his right shoulder in the third set of his opening match.

“I know in the back of my mind Nick’s shoulder deteriorated as the match went on,” Millman said after his first US Open triumph. “It’s a victory but slightly hollow.

Kyrgios endured an injury-nagged run-up to the US Open, hip pain knocking him out of Wimbledon and Queen’s and a sore right shoulder forcing him out at Washington.

But he rolled to the ATP Cincinnati Masters final two weeks ago, falling to Grigor Dimitrov.

The 22-year-old Aussie, known for outspoken remarks and often doubting his desire to play tennis, was in strong form when he grabbed his elbow of his first serve of the fourth game in the third set.

After having a ball boy grab his right arm between games to try and relieve the pain, Kyrgios had treatment by a physiotherapist during a timeout and told him his troubles.

“One serve and arm is totally dead. It’s so dead and numb. It’s incredibly weak,” said Kyrgios. “How can something happen all of a sudden? I wasn’t feeling it at all and then Bang, one serve. I lost power on my serve.”

Frustration grew as Kyrgios screamed an obscenity while glaring at his right hand after slamming down a racquet following the fifth game.

“My forehand is painful. It’s so annoying,” Kyrgios told the trainer after a line change.

Kyrgios grimaced during a treatment session, saying, “I try hard and then one serve I can feel it. I don’t get it. I don’t know what to do.”

“I’m feeling good. I finally have a good week last week, come to the US Open feeling good, playing a good match against an Aussie, third set and it’s throbbing.”

After his last available treatment, Kyrgios was broken to drop the set, sending a forehand wide on the decisive point then smashing his racquet on the court.

He was docked a point for that transgression.

Thiem, a semi-finalist at the past two French Opens, is the highest-ranked rival on the same side of the draw as favorites Federer and Rafael Nadal.

“I’m not in the first row of favorites, maybe in the second, so I can play calm,” Thiem said.

Sharapova, a five-time Grand Slam champion, tested positive for blood booster meldonium in the 2016 Australian Open, her most recent Grand Slam appearance until this week.

She played only one hardcourt tune-up match due to a forearm injury but powered past one of seven contenders for the world number one ranking still in the field.

Another of those is Svitolina, who dropped six of nine tie-breaker points when her match resumed but battled into the second round.

“It was a little bit unlucky to stop because I was playing good,” Svitolina said.

“Today was a little bit of a mess in my head. It was tough to keep my focus. I’m happy I could win the third set and play really good tennis.

“I was just trying to fight for every ball. You can’t win if you’re not mentally strong.”