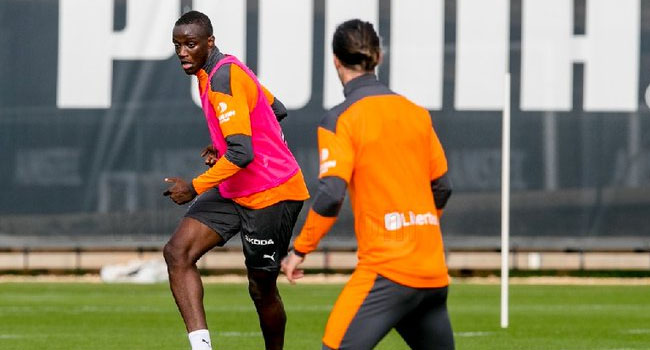 La Liga are investigating allegations Valencia’s Mouctar Diakhaby was racially abused by Juan Cala of Cadiz during their game on the weekend, the league’s president Javier Tebas confirmed on Monday.

“We are already carrying out an internal investigation with the videos and images of the game we have to clarify what happened,” Tebas told Movistar.

“The accounts are contradictory but looking at the behaviour of the Valencia player you can see that something happened.”

Valencia’s players walked off during the first half of Sunday’s game in protest but later resumed, with the club claiming they were told they would be punished if they refused to return.

“Valencia has to do what the referee determines,” said Tebas. “Obviously the referee did not hear anything because if he had I have no doubt that he would have suspended the game. What Valencia did was follow the instructions of the referee.”

Diakhaby had been involved in a heated exchange with Cala before the Frenchman left the field and the fixture was stopped.

Referee David Medie wrote in his match report Diakhaby told him that Cala called him a “negro de mierda”, meaning a “sh**ty black”.

Medie wrote the insult had “not been picked up by any of the refereeing team”.

Cadiz coach Alvaro Cervera said after the game that Cala insisted he had not racially insulted Diakhaby.

“We returned to the changing room, we talked,” Cervera said. “Cala said that at no time did he insult the player. I believe in my player.”

Cadiz have announced Cala will also hold a press conference on Tuesday to give his version of events.

Valencia released a video on Monday afternoon of first team players and staff standing behind Diakhaby on the club’s training pitch.

Everyone pictured is making a stop signal with their hand while there is also footage of Diakhaby speaking to coach Javi Gracia and being hugged by team-mates.

“Today, tomorrow, always, stop racism,” the post read. “We’ll fight until the end to clarify what happened, defend our player and eradicate racism!”

Valencia initially indicated it had been Diakhaby’s request for the players to keep playing but the club released another statement on Sunday night saying the players had been “forced” to continue, under threat of punishment.

“In the changing rooms we were told if we didn’t return, we would be sanctioned,” said Gracia after the match.

“In that moment, we spoke with Diakha, about how he was, and he told us that he wouldn’t play but he understood perfectly we had to continue playing to avoid a possible sanction, so we returned.”

Valencia defender Jose Gaya told Movistar: “He (Diakhaby) told us he was insulted in a racist way. We went back out to play because they told us they could penalise us with three points and something more. He asked us to go back, he’s gutted, it was a very ugly insult.”

The club’s president Anil Murthy said on Monday it should not have been left to the players to halt the game.

“We are saddened that, following the incident, there was no reaction to stop the game, and that it was our players who were the ones to leave the field of play,” Murthy said. “There cannot be a lack of action in light of these types of situations.”

Diakhaby argued with Cala in the 29th minute following a tussle between the pair in Valencia’s penalty area. Diakhaby suddenly sprinted towards Cala, who was standing close to the halfway line.

Several players rushed over to separate them, with Valencia’s Gabriel Paulista among those shouting at the referee. Diakhaby was visibly distressed and his reaction earned him a yellow card.

After being escorted away, Diakhaby spoke individually with the referee before walking off, his team-mates following behind. The Cadiz players waited a few minutes before also leaving the pitch.

Around 15 minutes later, both teams returned and a further five minutes afterwards, the game restarted, this time without Diakhaby, who was replaced by Hugo Guillamon and watched the second half sitting in the stands.

Cala was substituted at half-time, having earlier scored the opening goal for Cadiz, who went on to win the match 2-1.

Marca’s front page on Monday carried a black background behind a photo of Diakhaby sitting in the stands, with the headline ‘You are not alone’.