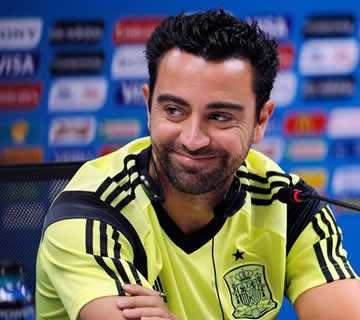 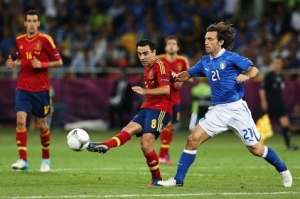 Xavi, who represented Spain 133 times, more than any Spainard outfield player and only bettered by goalkeeper and captain Iker Casillas in fourteen years, was a key figure in the La Roja glittering run when they won the 2010 FIFA World Cup in South Africa as well as the 2008 and 2012 European Championships.

The Barcelona midfielder had a disappointing 2013-14 season, when the Catalan side failed to win major silverware for the first time in six years and 2010 FIFA World Cup holders, Spain were knocked out of the 2014 edition in the group stage.

He gave reasons for calling time on his international career before Spain begin their qualifying campaign for Euro 2016.

“I’m grateful for all those years,” Xavi told a news conference after a Barca training session.

“It has been a fantastic time. I’m not 20 anymore, but I still have the motivation of a kid.”I was disappointed on two levels at the end of last season as I did not feel useful to Barca or to the national team.

Xavi, who has won three UEFA Champions League titles, seven La Liga titles and a host of other trophies with Barca, made his debut for Spain in a friendly against the Netherlands in November 2000.

He played in four World Cups and three European Championships and won 100 of his 133 matches for the Iberian nation, controlling play from a central position, regularly providing assists and also scoring the occasional goal.

Spain started the 2014 World Cup in Brazil as one of the favourites, but were dumped out of the tournament in the group stages after a 5-1 defeat by Netherlands and a 2-0 loss to Chile.

Xavi has decided to play on at club level under new coach and former team mate Luis Enrique despite reports going round that he is poised to end his career in the Middle East or USA.

“I would like to single out Luis Enrique, who has made me see that I can still be important.”