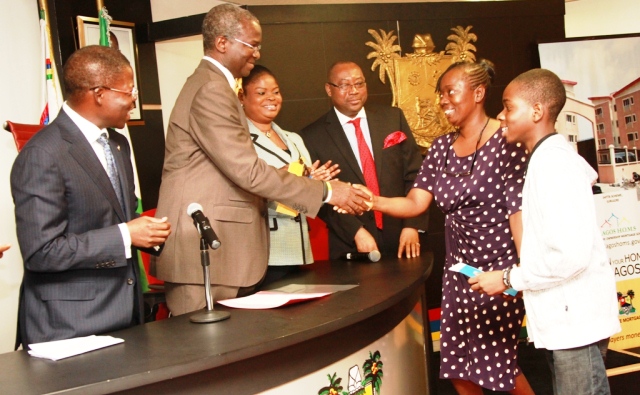 The first set of successful allottees of the Lagos Home Ownership Mortgage Scheme (Lagos HOMS) was on Monday presented with keys to their various homes by Governor Babatunde Fashola.

The Governor, who spoke at the Conference Room of the Lagos House, Ikeja, expressed the hope that the number of applicants would continue to increase month after month and described the first exercise as the beginning of a journey of promise.

“I am happy to see very young people who have become homeowners in their country and in our state and in a place where young people are struggling. Go and apply, pay your taxes, register as a Lagos resident and the rest is easy”, he added.

Speaking earlier, the Chairman of the Lagos Mortgage Board and Commissioner for Finance, Mr Ayo Gbeleyi described the event as another promise made and kept by the administration of Mr Bababtunde Fashola.

He added that out of the 31 winners that emerged at the first draw, 11 who have fully completed the requirements and have also achieved closure on their mortgage facilities are being handed their keys.

In a vote of assurance, one of the successful allottees, Mr Amos Omodunni said that after he came across the scheme on one of the social media sites where the photographs of one of the schemes was uploaded when the Governor visited there, he did not expect it to be as seamless and as easy as it turned out to be.

Fashola, who also reacting to the vote of assurance given by Mr Omodunni, stated that if Mr Omodunni was the only successful allotee, the efforts of the State Government and the Mortgage Board would still have been worth it.

Another excited allottee, Mrs Yetunde Awopeju who works with Atlas Technical Services Limited, commended Governor Fashola whose foresight, she said had come to the fore with the HOMS scheme.

She added that from what used to be a condemned location and a night club in Surulere, a beautiful estate had risen, adding that she was happy to be a beneficiary of the Shitta Housing Estate.

Mr Daniel Ikpe who works with Zenith Bank Plc recounted how he became aware of the process through the social media network, stressing that all he could volunteer was that the programme is about transparency.

The event was witnessed by the Deputy Governor, Mrs Adejoke Orelope –Adefulire, members of the State Executive Council, including the Commissioner for Housing, Mr Bosun Jeje and members of the Mortgage Board, the successful allotees and some members of their family.