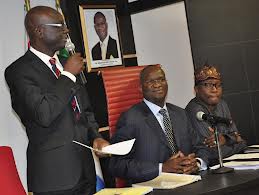 The Lagos state government has revealed that it generated the sum of N10.275billion from the land transactions in one year.

Addressing journalists at a ministerial press briefing to mark the 6th anniversary of Governor Babatunde Fashola, in Lagos on Wednesday, the Permanent Secretary Lands Bureau; Mr Hakeem Muri-Okunola said the figure fell short of last year’s earnings as a result of the global financial crises.

Mr Muri-Okunola also used the occasion to warn all those encroaching on government land to desist from such act as government will not hesitate to deal with them.