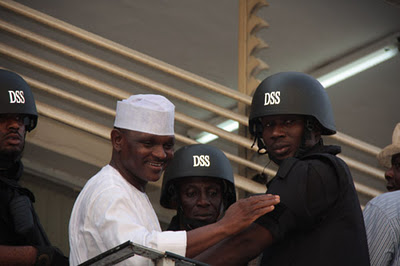 At a briefing by the joint security information committee, the Director of Army Public relations who was represented by his Chief of Staff, Colonel Joe Agim, said that Major Al-Mustapha, the Chief Security Officer to late General Sani Abacha, is still enlisted in the Nigerian Army.

“With regards to Mustapha’s release, well, I want to confirm that he is still in the army” he stated.

“The case is going to be handled by the army administratively in line with the harmonised terms and conditions of service.’’

He goes on to add that his case will be handled administratively by the Army in line with the harmonized terms of service.

Major Hamza al-Mustapha and Lateef Shofolahan were on Friday discharged and acquitted in the case of the assassination of Alhaja Kudirat Abiola, which last 14 years.


The former CSO admitted to journalists that he was still in Army on Sunday during his reception by the Kano state government, a status he claimed the Appeal Court Judges also confirmed in their ruling. 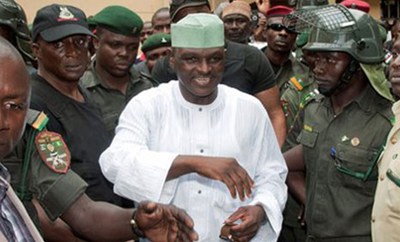 The Court in a unanimous decision ruled that there was no direct circumstantial evidence that he conspired with anyone as evidence of prosecution witnesses in that regard were contradictory.

Our legal correspondent, Shola Soyele  who is in the court reports that, Justice Rita Pemu who read the lead judgment held that there was no direct circumstantial evidence that he conspired with anyone as evidence of prosecution witnesses in that regard were contradictory.

She further held that based on facts and evidence before the court, it is certainly not Al-Mustapha who pulled the trigger and murdered Alhaja Kudirat Abiola.

The Court holds that he is liable to be discharged and acquitted.

Justice Amina Augie who is the presiding Judge has just concurred with the lead judgement as read by Justice Rita Pemu.

Third Judge, Justice Fatima Akinbami has also agreed with the lead judgement meaning that the ruling is unanimous.

The duo of Al-Mustapha and Shofolahan had appealed against the judgment of a Lagos High Court which sentenced them to death for the June 4, 1996 murder of Kudirat Abiola, wife of the deceased winner of the June 12, 1993 presidential election, Chief MKO Abiola.

Justice Mojisola Dada of the Lagos High Court had found them guilty of the offence, and accordingly convicted and sentenced them to death by hanging.

Counsel to the appellants had however, appealed to the Court of Appeal, 24-hours after the sentence of the convicts.

In the notice of appeal, the appellants contend that the death sentence handed by the lower court was unwarranted, unreasonable and a manifest miscarriage of justice.

The convicts were first arraigned in October 1999 on a four-count charge bordering on conspiracy and their involvement in the 1996 murder of the late Kudirat, on the Lagos/Ibadan expressway.

Justice Ibrahim Saulawa of the Court of Appeal, Lagos, has withdrawn from the three-man panel and declined hearing an appeal filed by Major Hamza Al-Mustapha and Lateef Shofolahan, challenging a death sentence against them.

The matter, which was scheduled on Thursday for arguments by parties, could not continue as the presiding Judge declined hearing for personal reasons.

Justice Saulawa told the appellants’ counsel that he could only assist them in recording a further date for arguments, but will not participate in hearing the main appeal.

He therefore adjourned the case to June 10 for hearing.

The convicts were sentenced to death on January 30, 2012 by Justice Mojisola Dada, for conspiracy in masterminding the murder of late Kudirat.