The money laundering trial of Senator Obong Albert Bassey before Justice Agatha A. Okeke of the Federal High Court, Uyo, Akwa Ibom State continued on Monday with the cross-examination of defence witnesses by the prosecution.

The Economic and Financial Crimes Commission had at the last sitting closed its case, while the defendant was ordered to open his defence. At today’s sitting, the defence called two witnesses, Kubiat Etah and Kennedy Ekong, who were cross-examined by prosecuting counsel, Attah Ocholi.

The witnesses, under cross-examination, claimed they were members of the defendant’s campaign team and that they each received buses for campaign purposes. However, they were unable to disclose the particulars of the vehicles and also did not state whether they personally took possession of the vehicles.

Asked whether they knew the nature of the transaction between the defendant and one Jide Omokore, the witnesses said ‘no’. They also said they were not privy to the procurement of the vehicles. Justice Okeke adjourned the case till 10th and 15th February 2022 for the continuation of defence.

The EFCC is prosecuting Senator Albert Bassey on six counts of money laundering, arising from the allegation that he took possession of six vehicles worth N204 million, at the instance of one Olajide Omokore, whose companies had contracts with the State Government, at the time.

Investigations revealed that the said vehicles were proceeds of crime and that he committed the offence while he served as Commissioner for Finance, Akwa Ibom State and Chairman of Akwa Ibom State Inter-Ministerial Direct Labour Coordinating Committee, in December 2012. The offence contravenes Section 15 (2) (d) of the Money Laundering (Prohibition) Act, 2011 (as amended) and is punishable under Section 15 (3) of the same Act. 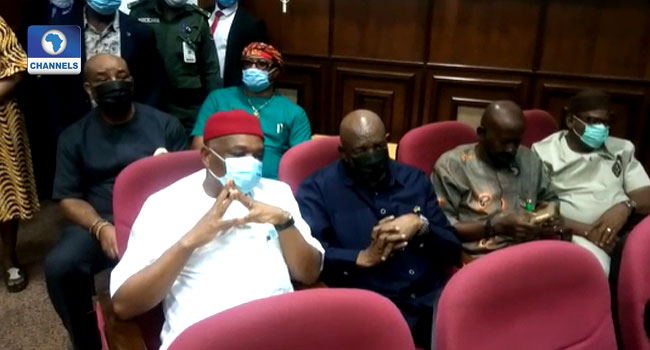 Hearing in the suit by former Governor of Abia State and Senate Chief Whip, Senator Orji Kalu seeking to stop his retrial by the Economic and Financial Crimes Commission (EFCC) on same alleged money laundering charges has been adjourned to April 20.

The adjournment is predicated on the fact the EFCC, which is listed as the first defendant in the suit, was not properly served with the originating summons.

At the resumed hearing of the suit, Rotimi Jacobs who announced appearance for the Commission on protest drew the attention of the court to the fact that the originating summons was served on his chambers instead of the EFCC.

He told Justice Inyang Ekwo that he was yet to be briefed by the anti-graft agency as its counsel and it would amount to professional misconduct to accept processes on the matter.

In his response, Professor Awa Kalu who appeared for Senator Kalu said he has no problem serving the EFCC with the originating summons.

Justice Ekwo accordingly adjourned the case to April 20 for hearing and directed the applicant to serve the EFCC within seven days.

The court had on February 8, 2021, granted leave to Senator Kalu to challenge his retrial by the EFCC on the same charges upon which he was sentenced and convicted.

Justice Inyang Ekwo thereafter, ordered that the planned re-arraignment of Senator Kalu in the alleged ₦7.1billion money-laundering charges be put on hold until the resolution of the legal questions raised against his retrial.

In a motion exparte argued by his counsel, Senator Kalu asked for an order of Court prohibiting the EFCC from retrying him on the same alleged money laundering charges against him.

He contended that having been tried, convicted and sentenced the on same charges a Federal High court presided over by Justice M.B. Idris, it will amount to double jeopardy if he is subjected to a fresh trial on the same charges.

Justice Ekwo in his ruling, granted leave to Senator Kalu to seek an order prohibiting the Federal Republic of Nigeria, through the EFCC (her agent), her officers, servants, others, agents, privies and any other person or bodies deriving authority from the Federal Republic of Nigeria, from retrying him on charge No. FHC/ABJ/CR/56/2007 between FRN vs Orji Kalu & 2 ors or any other charge based on the same facts de novo, there being no extant judgment and ruling of a competent court in Nigeria mandating same.

An order prohibiting the Federal Republic of Nigeria, through the EFCC (her agent), her officers, servants, others, agents, privies and any other person or bodies deriving authority from the Federal Republic of Nigeria, from retrying, harassing and intimidating him with respect to the charge as it concerns charge No: FHC/ABJ/CR/56/2007 between FRN vs Orji Kalu & 2 ors or any other charge based on same facts as he need not suffer double jeopardy.

The court further ordered that the leave should operate as a stay of proceedings until the determination of the application.

Justice Ekwo in his ruling held that the applicant who is fully clothed with the locus standi has placed sufficient materials in his supporting affidavits to warrant the court to exercise its discretion in his favor.

“Leave is at the discretion of the court under order 34(2) of the Federal High Court. In granting leave, there must be sufficient material fact placed before the court by the applicant to enable it to exercise its discretion judicially and judiciously.

“The averments in the affidavit in support of the motion are about the applicant who has demonstrated sufficient interest to cloth him with a locus standi to bring the action.

“By section 34 (9) of the constitution, no person who shows that he has been tried by any court of competent jurisdiction or tribunal for a criminal offence and either convicted or acquitted shall again be tried for that offence having the same ingredients as that offence save upon the order of a competent court.”

In his supporting affidavit deposed in support of his motion, Senator Kalu chronicled the historical background of the trial from his first arraignment and re-arraignment in 2016 and 2017, before the Abuja division of the Federal High Court after the initial charges were amended by the EFCC.

He further narrated how his application to quash the charges was not granted by both the trial court, the Court of Appeal and the Supreme Court.

Kalu told the court that following an application by the EFCC, to the Chief Judge of the Federal High Court, the charge was transferred to the Lagos division of the court and was assigned to Justice M.B. Idris now a Justice of the Court of Appeal.

Upon the transfer of the charge to Lagos, he bore the cost of movement of his entire legal team from Abuja to Lagos including the cost of accommodation up till judgment.

Senator Kalu disclosed that at the trial, the prosecution called a total of 19 witnesses and thereafter, closed it’s case, necessitating him together with other defendants to enter individually and respectively a no case submission.

He stated how midway through the trial, Justice Idris was elevated to the Court of Appeal as a Justice of the Court and subsequently took the oath of office and subscribed to the oath of Allegiance on June 22, 2018 and lost his position as a Judge of the Federal High Court.

The applicant also narrated how by a Fiat dated July 2, 2018, issued under the hand of the President of the Court of Appeal, Justice Idris was directed to return to the Federal High Court to conclude the trial, then part-heard in charge no: FHC/ABJ/CR/56/2007, between FRN vs Orji Kalu and 2 others.

That in his judgment on December 5, 2019, Justice Idris convicted and sentenced him with respect to the extant charge.