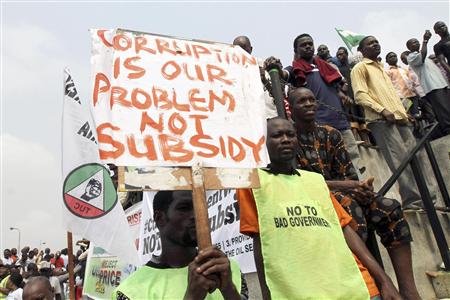 Poor electricity supply and corruption have been identified as some of the challenges to investment in Nigeria.

A World Investment report conducted by the World Bank on the investment climate in Nigeria which focused on 26 states in the country shows that 4.3 per cent of sales in the manufacturing sector was lost as a result of power failure.

Lead Private Sector Development specialist at the World Bank, Mr Michael Wong, who presented the report in Abuja on Thursday, called for the implementation of policies that would boost economic development in the country.

The last time the World Bank released a report on doing business in Nigeria was two years ago.

The latest report examined some of the challenges confronting the growth of small businesses in the country and problems such as insufficient power supply, lack of funding and corruption were identified as the key factors, just as they were identified in the last report.

World Bank’s Country Director in Nigeria, Marie Francoise Marie-Nelly, also asserted that “Nigeria has the most attractive environment for investment because Nigeria is a large market in the continent; it is the second largest economy in the continent. It is a market that any investor cannot ignore with over 160 million people and a gateway to ECOWAS.”

“For me, while we say the country’s current investment climate could be better in terms of providing electricity, access to finance and other things, you should also look at the huge opportunities for investment in Nigeria” she stated.

But in spite of these challenges the Minister of Trade and Investment, Dr. Olusegun Aganga believes that there is hope for the country.

According to the Minister, despite all the challenges, Nigeria’s global ranking on investment flow rose to 47 per cent last year.

He added that Nigeria’s growth rate in the past 10 years has consistently remained at seven per cent.

However, experts at the presentation of the report opined that these figures and percentage have not translated into job creation and address the widespread poverty in the country.

They agreed that the Small and Medium Enterprise (SMEs) sector of the nation’s economy must be given more priority in government policies.

The federal government declared that it will deliberate on the World Bank’s report to find a lasting solution to issues identified as setbacks to improving investment in the country.