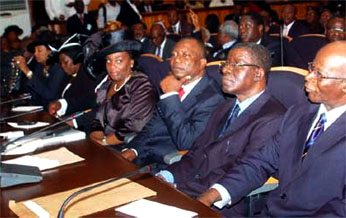 The President of the Nigerian Bar Association, Okey Wali (SAN) has called on the Federal Government to ensure proper funding of the judiciary as it is discovered that the budgetary appropriation for the arm of government has been on the decrease for several years now while that of other arms of government is on the increase.

The national president of the Nigeria bar association pointed this out during the association’s national executive meeting held in Asaba, Delta state to deliberate on issues concerning its internal association as well as other issues affecting the nation.

Meanwhile the host of the national executive meeting, the Attorney General and Commissioner for Justice in Delta state, Hon Charles Ajuyah (SAN) opined that the association is undoubtedly one that makes a difference in the lives of Nigerians, as legal and social issues will be taken into considerations during his meeting.

Addressing all present, the state governor, Dr. Emmanuel Uduaghan pointed narrated how his administration had been able to tactically reinforce the judicial system by bringing in one of their greatest critic to serve as the legal adviser to the state who has served as a bridge between the government and the legal system.

The meeting was attended by members of the state executive council and other members of the Nigeria Bar Association form various states all over the nation.