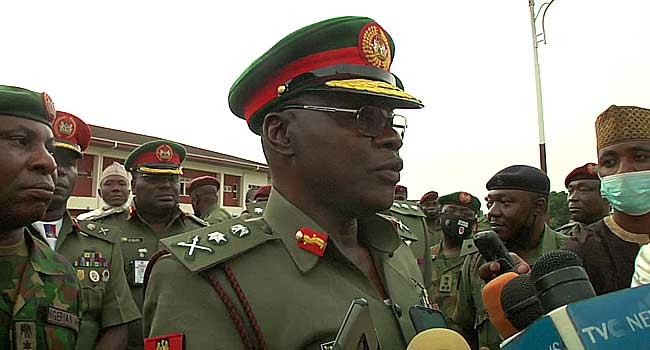 The soldiers were wounded in action at the various theatres of operation in the northeast while fighting the Boko Haram insurgents.

While at the hospital, the Army Chief interacted with the wounded soldiers and assured them of proper medical care and welfare, adding that their medical care is of utmost importance to him.

Speaking to reporters,  the Army Chief promised to make the welfare of troops in the front line his top priority,  even as he assured them of adequate medicare and support in the ongoing counter-insurgency operations.

“What brought me here first is to see our patients and appreciate them and relate with them, those of them who have sustained various degrees of injuries from the theatre of Operation Hadin Kai and other theatres and to assure them of our commitment to give them the best of treatment,” he said.

“I was pleased with the morale that I saw and the level of treatment being offered by the hospital. For those that require other services that are not here, we are also making efforts to ensure that we get these services.

“Some were constrained in this COVID that have imposed some restrictions on our movements. But we are gradually sorting them out and now all our patients we are adequately treated.”

He also reiterated his commitment to tackling banditry, insurgency and other security challenges in the country, stressing that logistics will be provided for troops involved in different military operations.

The Army chief also commended the President and Commander-in-Chief of the Armed Forces, President Muhammadu Buhari for his support to the military.