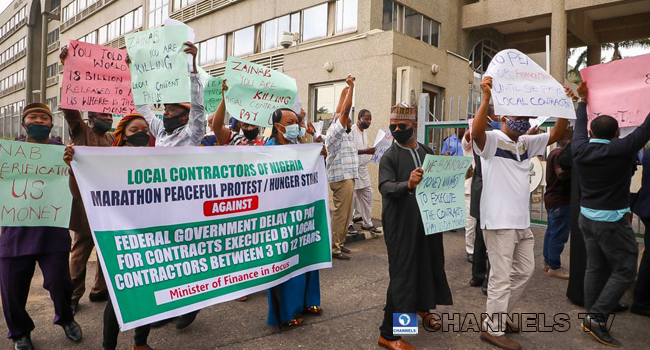 Some local contractors on Monday protested ‘unpaid benefits’ at the Ministry of Finance in Abuja.

The contractors said that in spite of verification of their contracts by the Presidential Initiative on Continuous Audit (PICA), which recommends the settlement of contracts within the threshold of one to N10 million, the Ministry of Finance is yet to commence payment.

Officials of the Ministry of Finance met with representatives of the contractors during the protest on Monday.

After the meeting, Publicity Secretary of the Local Contractors of Nigeria, Roland Dandi, said the ministry officials asked for about two weeks to begin to settle the debt.

“They said they have concluded the last section of the verification and are now ready to pay,” he said.

“We pray that we are going to be alive till that time. We will give them three weeks. After that and our monies are not paid, Nigeria will see us in a different, drastic step, much more than we have done today.”

See more photos from the protest below: The Ogun State House of Assembly Committee on Works and Infrastructure has enjoined both the Federal and State Governments in the country to increase patronage of indigenous contractors in the execution of their projects.

According to members of the Committee, doing this would go a long way in creating more employment opportunities and improve the socio-economic status of Nigerians.

The Committee members led by their Chairman, Hon. Joseph Adegbesan bore their minds while inspecting various road projects embarked upon by the State government in different parts of the State in continuation of their appraisal of 2013 budget implementation.

Hon. Adegbesan noted that the projects being handled by foreign contractors are well implemented, but stated that if given similar opportunity; local contractors could perform excellently like their foreign counterparts.

He commended the Senator Amosun-led administration for its vision and the quality of job done on the on-going road projects across the three senatorial districts of the State, adding that they would indeed create better living conditions for residents.

Others are Mobalufon junction and overhead bridge, Lagos garage and bridge in Ijebu-Ode, Ago-Iwoye–Ilisan road, Sagamu and all the on-going road projects within the Abeokuta metropolis.