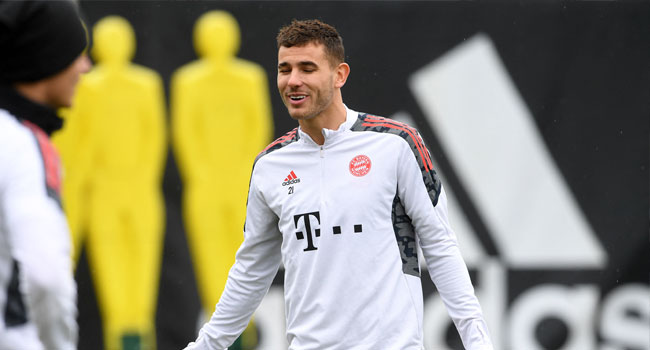 World Cup winner Lucas Hernandez is set to play for Bayern Munich at Benfica in the Champions League on Wednesday, just two days after appearing before a Madrid court for violating a restraining order in 2017.

“I would talk to him if I noticed anything unusual, but that is not the case,” Bayern head coach Julian Nagelsmann said in a press conference Tuesday.

“He is truly professional, has trained well and will certainly play a very good game tomorrow. He can separate the two things well.”

Earlier, Hernandez looked relaxed as the Bayern squad trained in Munich, a day after his round-trip to Spain.

The 25-year-old, who won the 2018 World Cup with France, appeared in a Madrid court on Monday – a day earlier than planned – with a six-month prison sentence hanging over him.

FC Bayern has confirmed the court date was brought forward so Hernandez could travel with the team to Lisbon on Tuesday.

Hernandez was arrested four years ago for violating a court order banning him from contacting his partner after a violent altercation between the pair.

He now has until October 28 to enter prison “voluntarily”, but has lodged an appeal that could keep him out of jail.

The legal matter dates back to February 2017 when Hernandez, then playing for Atletico Madrid, and his partner, Amelia Lorente, were both convicted of domestic violence.

They were ordered not to see each other for six months.

However, four months later Hernandez was arrested at a Madrid airport in the company of his partner, whose own restraining order had not yet been formally served.

They were returning to Spain after getting married in the United States and have since had a son.

Hernandez was sentenced in 2019 to six months in prison, a sentence he had appealed. It was the rejection of this appeal, on the grounds that he was a repeat offender, that led to this summons before a court in Madrid.

The center-back is expected to play against Benfica with Bayern chasing a third straight win in Europe to keep them top of their Champions League group.

Nagelsmann revealed Germany midfielder Leon Goretzka is out with a cold with Marcel Sabitzer set to deputise.

Canada’s Alphonso Davies is out with a leg knock and his place in defence is set to go to Josip Stanisic. 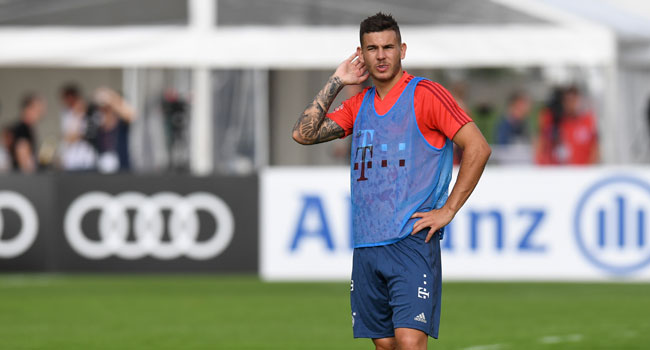 The 23-year-old French World Cup winner has yet to feature for Bayern since his 80 million euro ($89 million) move from Atletico Madrid in March.

His medical showed damage to the medial collateral ligament in his right knee that required an immediate operation.

Hernandez is unlikely to be ready for the opening game of the season against Hertha Berlin on August 16 but it is good news for his new teammates and manager Niko Kovac.

“I think the most important thing, for the time being, is that he’s properly fit and starts to settle in,” German international Leon Goretzka told the Bayern website.

The defender’s return coincides with a media broadside aimed at the club by striker Robert Lewandowski who has called on Bayern to bring in at least three new players.

“In attack, we lost three players in the shape of Franck Ribery, Arjen Robben and James (Rodriguez),” Lewandowski told Sport Bild on Wednesday.

“And for the moment we have no new recruits for these positions.”

While Robben has retired, Frenchman Ribery is out of contract and seems likely to be heading to Saudi Arabia while James has come to the end of a two-year loan period and has returned, for the moment at least, to Real Madrid.

Veteran defender Rafinha has also left in order to return to Brazil.

So far this summer, Bayern have only reinforced their defence with French world champions Hernandez and Benjamin Pavard while promising 19-year-old striker Jann-Fiete Arp has arrived from Hamburg.

The German champions have also been trying for weeks to attract Leroy Sane from Manchester City but no announcement has yet been made.

Bayern’s core team is made up of top-class internationals but, after the summer movement, the bench is now very shallow.

“Playing an entire season with 13 or 14 experienced professionals, it’s going to be tough,” warns Lewandowski who has already discussed the matter with club president Uli Hoeness and chairman Karl-Heinz Rummenigge.

“We have 50 or 60 games, so do not just think about next week but at three, four, five or six months. And for that, we do not have enough players. Hoeness and Rummenigge know my opinion.”

Hoeness and Rummenigge have promised to reinforce the playing ranks as they set their sights on the double of Bundesliga and Champions League. 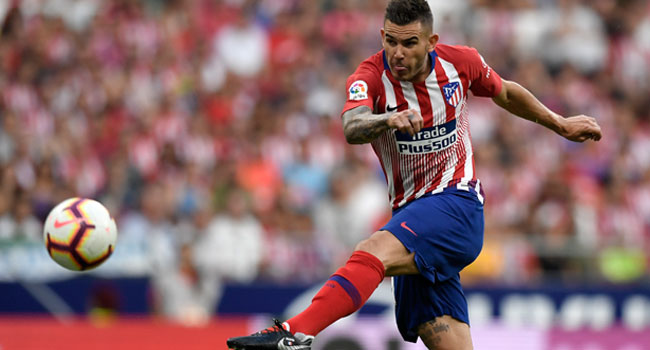 The 23-year-old World Cup winner will sign a five-year contract starting on July 1, Bayern said in a statement.

The 80 million euro fee makes him the most expensive signing in Bayern’s history, almost doubling the sum paid for Corentin Tolisso.

“I am very happy that we have managed to sign Lucas Hernandez, who is a World Cup winner and one of the best defensive players in the world,” said Bayern sporting director Hasan Salihamidzic.

“Lucas can play in central defence or at left-back. He will strengthen our team and continue the tradition of fantastic French players at our club.”

Bayern were knocked out of the Champions League in the round of 16 and Hernandez could be the first signing in an expected overhaul of the squad.

Hernandez has had a knee problem for a while. He has not played for Atletico since Feb 9 and missed France’s recent internationals.

Bayern said that he would undergo an operation on Wednesday after a medical exam revealed a problem with his knee.

“Our medical examination revealed damage to Lucas Hernandez’ right knee, which will have to be operated on,” said Bayern team doctor Hans-Wilhelm Mueller-Wohlfahrt, confirming that Hernandez would, nonetheless, be fit to play by the start of next season.

Hernandez signed for Atletico Madrid as a youth player in 2007, and has made 110 senior appearances for the club since his first team debut in April 2014. Last summer, he was a key player in France’s World Cup winning campaign.

“This is a very important day in my footballing career,” said Hernandez.

“Bayern are one of the best clubs in the world. I will be proud to compete for all titles for Bayern in the future.”

“I would like to thank Atletico, the management, the coaches, my team mates and the fans for 12 wonderful years in Madrid,” he said.

“Atletico will always be a part of me, but I am now happy to be making the next step at Bayern.”