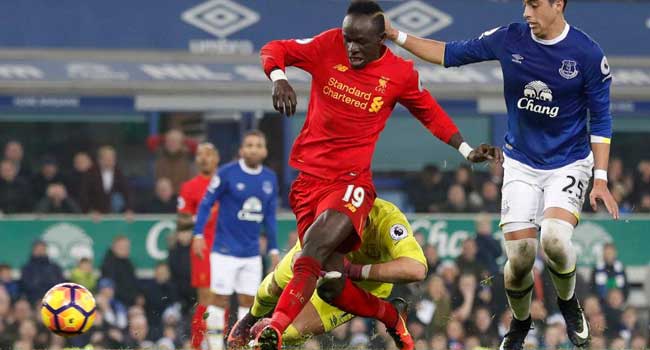 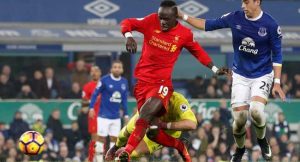 Sadio Mane struck a stoppage-time goal to claim victory for Liverpool in the Merseyside derby on Monday night.

In a frenetic first half at Goodison Park, dominated by an industrious home side, Ramires Funes Mori had the best chance, steering a free header wide from an Everton corner.

After the break Liverpool went into the ascendancy, with Roberto Firmino denied when through on goal by Maarten Stekelenburg, who later went off injured.

The winner came in the fourth minute of stoppage time when Mane reacted fastest to Daniel Sturridge’s shot hitting a post.

The result moves Liverpool to second, six points behind Chelsea while Everton are ninth.

“We have to wait to see about Maarten Stekelenburg’s injury – we will know more tomorrow – and James McCarthy has a hamstring injury.

“I know exactly how fast Sadio Mane is, he reacted so well. We did not deserve to concede this goal.

“Maybe Ross Barkley was lucky, it was a hard tackle.”

Liverpool manager, Jurgen Klopp told BBC Sport: “I don’t agree it was a poor first half. Maybe not the best football – you have to adapt to Everton’s wild game. A game like this you have to interrupt their rhythm with passing.

“In the second half it was clear they couldn’t do the same. We were better, we didn’t give one chance away I think.

“The goal was not the hardest shot from Sturridge, but hard enough. It was a wonderful feeling.

“I don’t like the flares too much. I’m a little bit scared about this. It was a long, long stoppage time. We gave them no chance.”