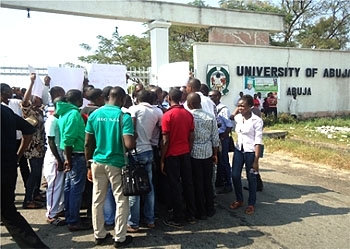 Examinations at the University of Abuja have been disrupted following protests by students against non-accreditation of some courses at the university.

The school consequently announced postponement of examinations till Monday, the 18th of February.

But the students who were dispersed by security operatives threatened to continue if the issue is not resolved.

Hundreds of students were at the gates of the University of Abuja main campus.

The students embarked on a protest to disrupt examinations fixed by the school.

They vowed to prevent examinations until all pending issues of non-accreditation of courses are immediately resolved.

In April 2012, the Federal Government had approved N2 billion for the school to resolve all issues of non-accreditation but the Vice-Chancellor said he only accessed the money last month. The students are however angry over the seemingly unending promises.

The students proceeded to the mini-campus were there was heavy security presence to prevent any violence but in spite of this, they made desperate attempt to seal up the premises to drive home their grievance.

Some lecturers in solidarity with the students revealed that the vice-chancellor has done more harm than good with the failed assurances to the students. They ask the Federal Government not to keep silent over the white paper report submitted to it.

In the meantime the students have vowed to continue disrupting examinations fixed by the school until there is a concrete solution to resolve their plight.