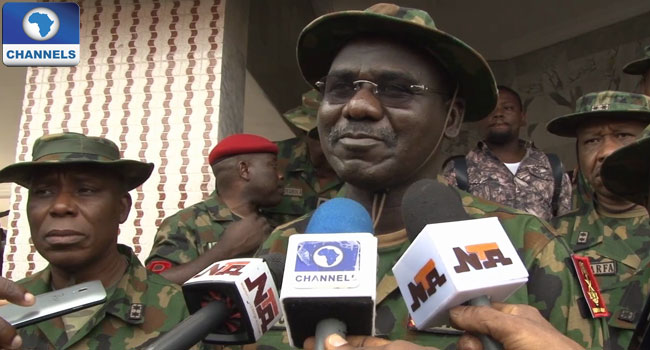 The leadership of the Nigerian Army says it is committed to building  a professionally responsive personnel to ensure adequate containment of various security threats through the conduct of sustained internal security operations and exercises.

This is part of resolutions put forward at the end of a 4-day 2016 Chief of Army Staff Conference held in Owerri, the capital of Imo State.

Presenting an eight-point communique to reporters after the conference, the Nigerian Army said it remained committed to security of lives and property of Nigerians and the nation territories, as amply demonstrated in the outgoing year, 2016.

Earlier in his closing remarks, the Chief of Army Staff, Lieutenant General Tukur Buratai, expressed optimism that the recommendations and deliberations arrived at during the conference would be useful in tackling the security challenges in Nigeria, especially in the northeast.

The State’s Governor, Mr Rochas Okorocha, who was at the closing ceremony of the conference, commended the Nigerian Army for finding time to brainstorm on how to tackle the security challenges facing the nation.

He asked the Nigerian Army to ensure that recommendations and suggestions from the conference were implemented to the letter.

Amongst the resolutions reached is the Nigerian Army’s commitment to containing the various security threats through the conduct of sustained internal security operations.

The Army also emphasised the need to expand ongoing collaborations and partnership with the private sector, as part of Nigerian Army’s diversification drive in enhancing maintenance capacity and promoting local production.

The Chief of Policy and plans Nigerian Army, Major General Lincoln Ogunewe, who read the recommendations, also commended the efforts of the Nigerian Army in reassuring the government and citizens of the protection of lives and property.

Hopefully, if the recommendations and suggestions from this conference will be implemented, more successes would be recorded in the fight against terrorism and militancy in the years ahead.