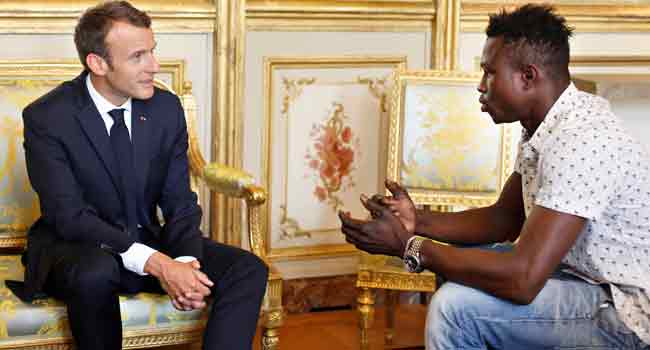 The young Malian migrant who saved a four-year-old child hanging from a fourth-floor Paris balcony after scaling the facade with his bare hands will be made a French citizen, President Emmanuel Macron said Monday.

Mamoudou Gassama, who met with Macron after a video of his rescue went viral on social media, will also be offered a place in the fire brigade, the president added.

Mr. Halle Ousmani Sisse said the Islamist rebels, who had occupied the fabled trading town since a Tuareg-led rebellion captured it on April 1, 2012 from government forces, also torched his office and the home of a member of parliament.

The newly-constructed Ahmed Baba Institute, one of several libraries and collections in the city containing fragile ancient documents dating back to the 13th century, built by the South Africans was also torched four days ago.

Ahmed Baba Institute is named after a Timbuktu-born contemporary of William Shakespeare and houses more than 20,000 scholarly manuscripts; some stored in underground vaults.

Fighters from the Islamist alliance in the north of Mali, made up of AQIM, the Malian Islamist group Ansar Dine and AQIM splinter MUJWA, had also destroyed ancient shrines sacred to moderate Sufi Muslims, provoking international outrage.

French and Malian troops were securing the city on Monday.