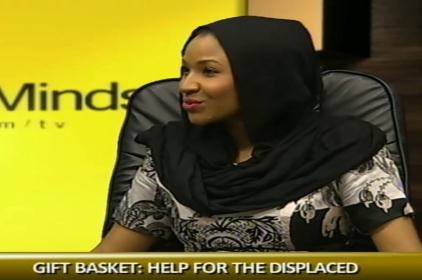 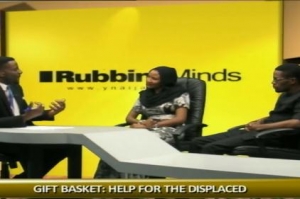 The security situation in Nigeria, especially in Adamawa, Borno and Yobe states came to the fore on the Sunday July 13 edition of Rubbin’ Minds on Channels Television.


The three states have been under a State of Emergency for over a year having been extended by the Nigerian Government. However, something many do not know is that Nigeria has been rated to have the highest number of internally displaced persons (IDP) in Africa with a figure of 3.3million.

A report by the Internal Displaced Monitoring Centre (IDMC) and the Norwegian Refugee Council (NRC), “Global Overview 2014: people internally displaced by conflict and violence,”  stated that the number of internally displaced persons in Nigeria is approximately a third of the IDPs in Africa and 10 per cent of IDPs in the world.

In 2013 alone, 470,500 persons were displaced in Nigeria and this is the third highest in the world, behind Syria with 6.5 million and Colombia with 5.7 million.

The Executive Director, Action to Yield Aid for Hopeful Adults and the Young (AYAHAY), Mariam Augie, and a Security Expert, Nnamdi Anekwe, were on the programme to discuss issues surrounding this and efforts at offering support.

Ms Augie noted that the issue of displaced persons was very new to Nigerians because reports have always mainly focused on attacks and the number of deaths but not the people suffering from the aftermath of such violence.

She noted that while there were 3.3 million Nigerians directly affected by the insurgency, another 9 million were indirectly affected, a situation which called for the efforts of everyone to help those affected and shift attention to those who survived the attacks, as Government agencies alone cannot handle it.

Speaking about the current efforts being made to cater to the refugee victims of the insurgency in Nigeria, she stated that the notable help coming for the displaced persons has been in form of the accommodating nature of Nigerians with communities helping to provide shelter as there were no camps created but noted that there is a limit to how far this would help.

Mr Anekwe, also added that some individuals and leaders in Adamawa State have been setting up initiatives to come to the aid of the displaced persons. He, however, advised that it was important for camps and alternative accommodations to be provided.

Although Ms Augie shared the view that host communities may have been so far preferred over camps by authorities because of security reasons, she agreed with Anekwe and warned that if the situation got worse, the country would have no choice. 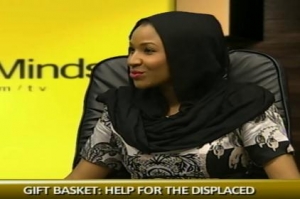 “From eating 3 square meals a day to one square meal a day, 500 people to one toilet, no water, sanitation, health facilities are almost obsolete, so we know that it’s a really terrible situation”, she said, as she decried the living conditions of victims of insurgency in the affected region.

Mr Anekwe also spoke about the implications of having such number of displaced persons on the country. He highlighted the level of sophistication of the insurgents and noted that fighting them should not be left alone to the Government.

Both guests also warned against allowing the bombings and other attacks to continue with children growing up with the idea of violence on their minds, as this would be more detrimental to the future of the country.

Ms Augie also provided an insight into the activities of her organisation, which is made up of individuals who fearlessly came together to design a plan on how to help the victims of insurgency in North-East Nigeria.

She explained that they started out by contacting agencies like the Red Cross and the National Emergency Management Agency (NEMA) to know what their needs were, as the mission of the AYAHAY was to complement Government efforts and the international organisations that were already helping out, as they also believed that the international community should not be left to fight Nigerians’ battles.

“From mattresses to mosquito nets to grains, insecticides, female kits and anything within your reach, anything it is that you can give, we will appreciate it”, she said.