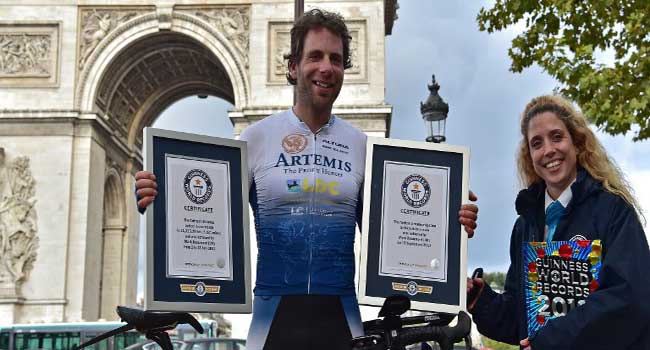 A British cyclist set a new world record Monday by travelling around the globe in 79 days — beating the fictional exploits of Phileas Fogg by a day.

Scottish adventurer Mark Beaumont rode into Paris 78 days, 14 hours and 14 minutes after he set off from the French capital, smashing the previous record of 123 days for a round-the-world bike trip.

Arriving in evening rush hour traffic under light drizzle, the 34-year-old rode the last cobbled mile to the Arc de Triomphe with a 20-strong entourage on wheels, including a man in a top hat on a penny-farthing bicycle.

Some 50 supporters were at the monument to greet him, including his tearful wife Nicci and his daughters Harriet, four, and Willa, one.

“I doubt I’ll ever do anything like it again,” said Beaumont, describing the journey as “definitely the longest two-and-a-half months of my life”.

Bouncing his grinning one-year-old in his arms, Beaumont said the world record was “an absolute dream come true”.

A Guinness World Records judge was on hand to present him with his two framed records — he also beat the previous time for the farthest distance cycled in a month — while he was still in the saddle.

Beaumont had held the round-the-world record until 2009 when it was beaten by a New Zealander, leaving Beaumont to conclude he simply had to have the title back.

“I have taken myself beyond anything I have ever done physically and mentally,” he said.

Fogg took 80 days to complete his voyage by train, ship and balloon in Jules Verne’s classic 1873 novel, “Around the World in 80 Days”.

Although Beaumont was able to fly over the Atlantic and Pacific oceans, he did the rest with his own muscles.

The three remaining days were spent on flights.

“I am quite looking forward to not getting up at half-past three every morning,” Beaumont joked as he set out in the dark on the 180-km final stretch in the Loire valley southwest of Paris.

Beaumont set out from Paris on July 2 and crossed Europe, Russia and Mongolia before arriving in Beijing.

From there he flew to Perth in western Australia and crossed the country as well as neighbouring New Zealand before flying on to Anchorage in Alaska.

His trans-American journey ended in Halifax in Canada, where he boarded a flight for Lisbon.

Beaumont said being the fastest man to cycle round the world has been his dream since childhood.

This is “the culmination of me as a 12-year-old boy pedalling across Scotland 22 years ago and going on lots of adventures, going further every time,” he told his followers on Twitter.

– Problems walking –
Beaumont set the world record in 2008 when he cycled around the world unsupported in just short of 195 days. That was bettered by New Zealander Andrew Nicholson doing it in 123 days two years ago.

In the meantime Beaumont had taken on other adventures, and was part of a team who tried to break the record for rowing across the Atlantic in 2012, only to capsize after 27 days.

Although his latest escapade has not been so obviously dangerous, spending so long in the saddle has taken its toll. Beaumont told reporters that even walking up airport stairs “really hurt”.

And he predicted that his record may not last forever.

“But I’ll always be the first who did it (in under 80 days). No one remembers who was second up Everest.”