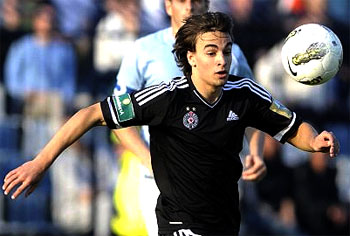 Reports making the rounds in England is that European Champions Chelsea have landed themselves a news signing, Serbian Lazar Markovic from Partizan Belgrade as Partizan and Stamford Bridge club are close to signing a deal on the youngster from Serbia.

Despite being only 18 years old Markovic has already represented his country. He made his debut early this year and became the youngest player ever to represent the Serbian national team. He currently has five caps to his name.

Markovic is represented by LIAN Sports and that’s the same agent group who brought Matija Nastasic and Marko Marin to the Premier League last summer. They also have Stevan Jovetic and Adem Ljajic as clients and both have been rumoured to be a targets for Chelsea several times. Linking the players with moves to Chelsea helps increase their profile and availability and is often followed by interviews in the press from the agency.

The rumours of a deal have been followed by a denial from Partizan and their sporting director Ljubisa Tumbakovic is quoted by Calciomercato.it as saying “I swear on my mother, I know nothing about it. On Saturday I spoke with the president Dragan Djuric and he confirmed that he knew nothing of a transfer of Markovic to Chelsea. Perhaps journalists are better informed than us.”

And right on queue his agent has been quoted by the same outlet as saying a deal won’t happen in January “Markovic has a contract with Partizan. Move in January? I can assure you that [a move] will not start in the next session of the market and then we’ll see.”

LIAN Sports are increasingly seeking out opportunities in England for their players and the reported interest in Markovic coincides with a growing awareness of young talent in Serbian football.

Arsenal has also been linked with both Markovic and Ljajic recently. 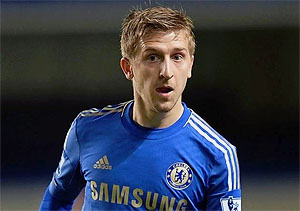 One of new Chelsea signings for the 2012/2013 season Marko Marin boasted that Chelsea will have no problem keeping his German rival Lukas Podolski under control as both clubs will be meeting for a London Derby.

Podolski who has been in a tremendous form will be a huge threat to the Blues’ hopes of winning Saturday’s London ­derby against Arsenal.

After a slow start, Podolski has bagged three goals in his last four Gunners games.

Attacking midfielder Marin, 23, said: “At the beginning it was a bit new for him, but now he is doing very well.“He has scored a few goals and he is playing well.

“Will Lukas be a threat? I think we have a very good ­defence. Our right-back Branislav Ivanovic will do very well.“It will be very hard for Lukas to play against him. I am not sure that Arsenal has played against a good team like us.

“I am confident that we can keep Podolski quiet.“There are two German players that we will be playing against, with Per Mertesacker also playing for Arsenal.

“I have not spoken to Lukas. We know each other from the national team, of course, but we are not really friends. “I hope I’m in the team, but the important thing is that we win and keep our position in the Premier League.”

Marin finally made his Blues debut in the 6-0 Capital One Cup rout of Wolves after missing the start of the season with a ­hamstring injury.He said: “I did it in a training session, but I feel good now and I can forget all that and look to the future.

“I just want to play for as long as possible, for as many games as I can. I am nearly 100 per cent fit again, so I hope to play.” Meanwhile, full-back Ryan Bertrand aims to build on his success after scoring in Tuesday night’s romp.

The 23-year-old has played a part in all but two games this season and forced his way into the England reckoning.

He said: “The year just keeps getting better for me so as long as I can keep it going, I should be able to do good things.

“We want to keep it going and hopefully repeat the success we had last year.”