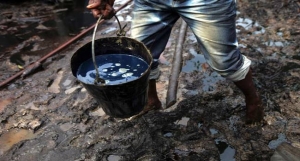 The report claimed that officials of NAOC had commenced recovery of spilled crude from Ikienghenbiri community in Southern Ijaw Local Government Area of Bayelsa State.

The report, signed by Head of Field Operations at ERA, Mr. Alagoa Morris, said that more than 30 plastic tanks of 2,000 litres of crude had already been recovered by Agip officials.

ERA, the environment focused non-governmental organisation regretted that a joint investigative visit had yet to be conducted to ascertain the cause of the leak and urged the management of NAOC to urgently convene a JIV to the spill impacted site.

Some community sources at Ikienghenbiri said that the development had crippled economic activities in the predominantly fishing and farming coastal settlement as oil recovery was still ongoing at the spilled site.

A former Community Development Committee Chairman in Ikienghenbiri, Mr. Marshall Josiah, said that the community had reported the incident promptly but the oil firm had allegedly delayed its response resulting in the massive leaks.

He said, “Due to the heavy volume of crude oil so far spewed, we have not been able to commence the process of clamping the ruptured point.

“We are looking for a way to evacuate the crude oil from the place to enable us to access the oil-bearing pipe and repair it.

“That is what we are doing now, recovery of spilled crude oil. No JIV has been done on this spill incident.

“I saw several Geepee (plastic) tanks being used for the recovery exercise. From my observation, it may take them up to two or three months to conclude that task. And much of the surrounding bush/swamps have been completely polluted.”

The Community leader regretted that the pollution had depleted the arable land and fishing grounds available to Ikienghenbiri for fishing and farming, adding that urgent steps should be taken to bring reliefs to the people affected by the spills.

Officials of NAOC declined comments when contacted for comments.