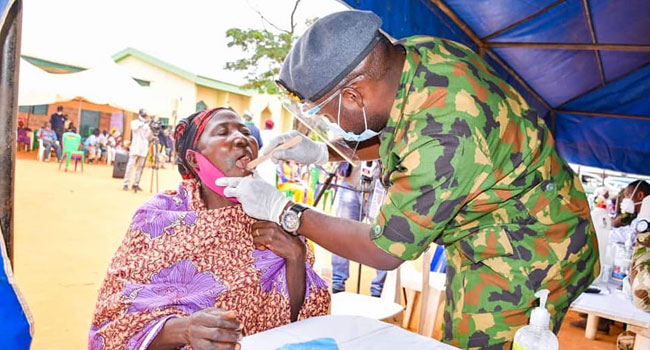 The Nigerian Air Force has commenced free medical services to victims of banditry attacks in some communities in Southern Kaduna.

The victims include over 3,000 Internally Displaced Persons in Zonkwa, Zangon-Kataf Local Government Area (LGA), and Mariri in Lere LGA of the state.

In his remarks, the leader of the Medical Team, who is also the Chief of Medical Services, Air Commodore Gideon Bako, commiserated with the IDPs.

He stated that the Chief of Air Staff, Air Marshal Sadique Abubakar, was very passionate about humanitarian activities and had shown immense concern for the plight of the people affected by the recent banditry attacks in the area. According to Bako, the Air Force would do everything within its power to bring succour to the people who continue with their daily businesses.

“We are going to have 6 days of medical outreach, that would be conducted in 2 phases. Three days will be done here at the Mercy IDP Camp, while the remaining 3 days will be at Mariri IDP Camp in Lere LGA,” he said.

He therefore appealed for the cooperation of the people.

Reacting, the Chairman of Zangon-Kataf LGA, Dr Elias Manza, who was represented by the Vice Chairman, Mr Tonac Yakubu, thanked the Air Force for the kind gesture and promised to partner with the service to ensure a successful outing. “Despite the fact that we are bereaved, we were very excited when we heard that the NAF was organizing a medical outreach in Zonkwa. We are very delighted.

“I want to say thank you so much for seeing through our plight and coming to commiserate with us and to take care of our sick and displaced people.

“Our joy knows no bound and we pray that this heart of kindness and concern is just the beginning of what we would see the NAF doing in our midst,” he said.

The three-day free medical services in the two locations, is aimed at enhancing good civil-military relations between the Air Force and host communities. 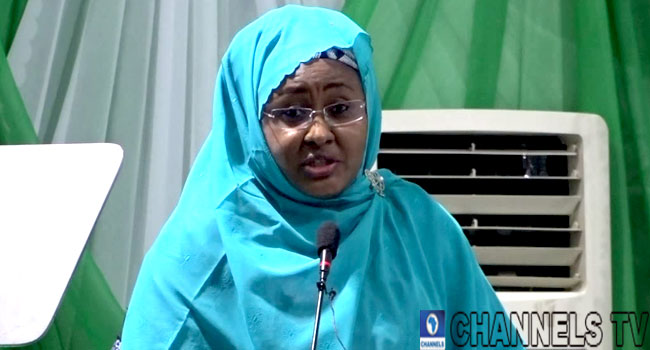 The First Lady, Mrs Aisha Buhari is reported to have travelled out of the country to Dubai, in the United Arab Emirate for undisclosed reasons.

Although the office of the First Lady could not confirm the reason for her trip, there are strong indications that Mrs Buhari may be receiving medical attention in the Arab country.

The First Lady who was last seen in public during the Eid-el-Kabir prayers with her family at the villa reportedly left the country after the celebration.

She was said to have gone on 14 days isolation after visiting the Lagos home of Mrs Florence Ajimobi, the wife of former Oyo State Governor, Abiola Ajimobi who died of COVID-19 complications.

However, after the isolation, the president’s wife reportedly continued to experience the pains, prompting the Dubai trip. 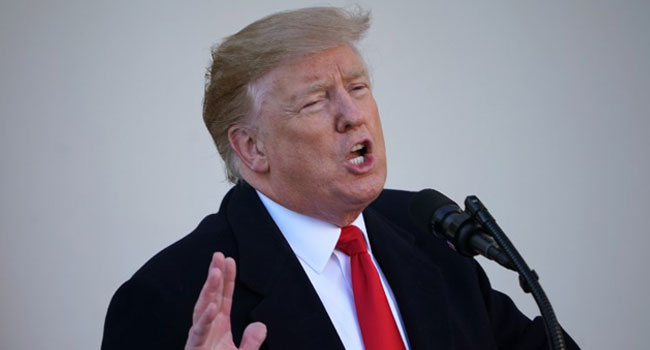 The Marine One helicopter will take him to the Walter Reed National Military Medical Center in the Washington suburb of Bethesda for a full four hours of prodding, poking and testing, the White House said.

It was not clear how many of the results would be made public or when, but last year everything from the president’s cholesterol levels (high) to weight (too high at 239 pounds (108 kilograms) was released.

Trump’s then chief physician, Ronny Jackson, also held a press conference in which he declared Trump to be in “excellent health.” Jackson, a Navy rear admiral, has since run into trouble over alleged ethical misconduct and a different team will assess 72-year-old Trump.

On the plus side, Trump doesn’t smoke and is a noted teetotaler. He says he’s never even had a beer.

Not for Trump the basketball sessions that Barack Obama sweated through in the White House, or the bike rides of George W. Bush.

Trump loves the more sedate game of golf, but rides a cart between holes and has said that anything more strenuous is actually bad for your health.

“All my friends who work out all the time, they’re going for knee replacements, hip replacements —- they’re a disaster,” Trump told The New York Times in 2015.

Trump has described his chief exercise as walking around the White House compound and standing up at public events.

In January, Trump hosted the strapping athletes of America’s champion college football team, the Clemson Tigers, with a mountain of hamburgers and pizzas.

According to Jackson last year, Trump’s secret is genes.

“Incredibly good genes,” he said. “It’s just the way God made him.” 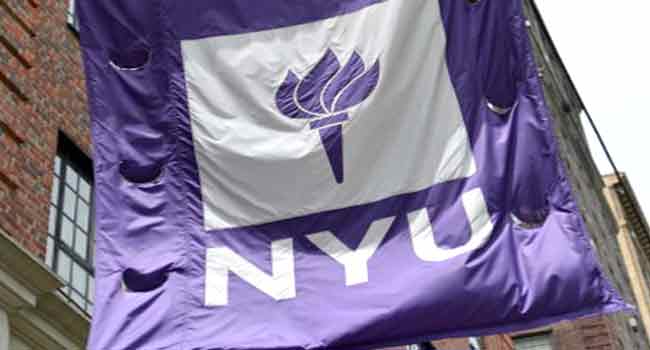 New York University said Thursday it would offer all its current and future medical school students free tuition in an effort to tackle soaring debt levels and encourage more applicants.

The move — which it said was financed by the generosity of the university’s “trustees, alumni, and friends,” amounts to a reduction of $55,018 in annual fees, regardless of financial needs or academic merit.

It does not cover living and administrative costs averaging $27,000 a year.

“A population as diverse as ours is best served by doctors from all walks of life, we believe, and aspiring physicians and surgeons should not be prevented from pursuing a career in medicine because of the prospect of overwhelming financial debt,” said Dr Robert Grossman, dean of the NYU School of Medicine.

In its statement, NYU also pointed out that high student debt was putting graduates off pursuing less lucrative specializations including paediatrics and obstetrics and gynaecology.

According to the Association of American Medical Colleges, the median debt of a graduating medical student in the US is $202,000 — while 21 per cent of doctors who graduate from a private school such as NYU face over $300,000.

“Our hope -— and expectation —- is that by making medical school accessible to a broader range of applicants, we will be a catalyst for transforming medical education nationwide,” said Kenneth Langone, chair of the Board of Trustees of NYU Langone Health.

Thursday’s announcement came as a surprise ending to the school’s annual white coat ceremony, which marks the start of first-year students’ medical careers.

Those 93 students will benefit from the scholarship, along with 350 others enrolled further along in the program.

NYU said it is the only top 10-ranked medical school in the US to offer such an initiative.

Dr Akeem Alawode, a Senior Resident Doctor LUTH explains to Sunrise Daily, why doctors with the federal government hospitals have joined the doctors’ strike in Lagos.

He notes that the mass sack of the almost 8oo doctors is not only affecting the health sector but also the academic sector as some of the sacked doctors were senior medical academics that teach in the Lagos state University Teaching Hospital (LASUTH).