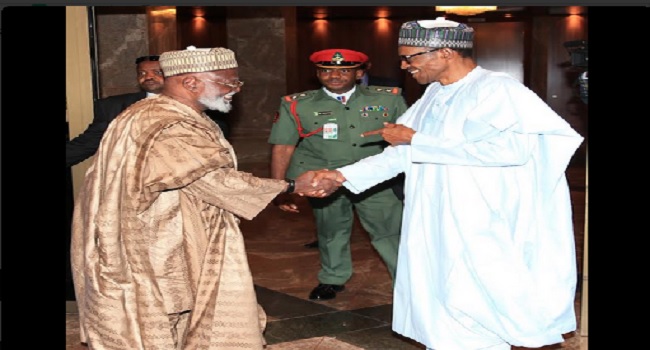 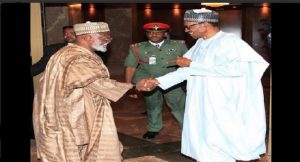 A former Nigeria’s military Head of State, General Abdulsalami Abubakar, has held a meeting with President Muhammadu Buhari at the Presidential Villa.

General Abubakar arrived at the Presidential Villa at about 12:33pm local time and went straight into the President’s office for a meeting that lasted for about an hour.

After the meeting, the former Head of State told reporters that he was at the Presidential Villa to discuss issues of national interest and international affairs.

When asked about his comments on the issues concerning the Niger Delta and the fight against terrorism, the former military leader said that he did not come to talk to the press and that the government in power was doing its best in handling of the situations.

The former military leader midwifed the peace talks that led to the peaceful hand over from the Jonathan administration to Muhammadu Buhari.

He had also in June said he believed that lasting peace could return to Nigeria.

He called for dialogue between government and various insurgency groups including the Niger Delta Avengers militant group.

General Abubakar also lamented that Nigerians were suffering unduly because of the actions of various insurgents including the Boko Haram, Avengers and Biafra agitators.

The meeting between President Buhari and the former leader is coming days after the Boko Haram sect released a new video of some girls it abducted from Chibok community two years ago.

The group had in the video requested for prisoners swap with the girls.

General Abubakar played a major role in the transition of Nigerian government from military to a civilian government in 1999 and in ensuring a smooth transition from the Peoples Democratic Party to the All Progressives Party.