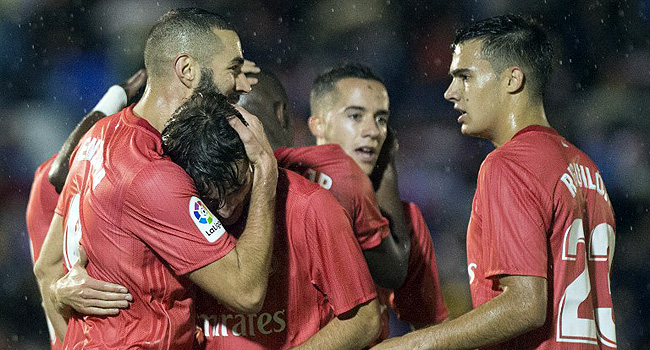 Santiago Solari’s reign as interim Real Madrid coach got off to an encouraging start on Wednesday as the European champions made light of third-tier hosts Melilla in the Copa del Rey.

Goals from Karim Benzema, Marco Asensio, Alvaro Odriozola and Cristo Gonzalez earned the 19-time champions a 4-0 win on their first visit to this Spanish enclave on the north African coast.

Solari was promoted from boss of Real’s Castilla B team on Monday after the sacking of Julen Lopetegui only 139 days after his appointment.

Sunday’s 5-1 Clasico humbling by Barcelona proved the last straw for Real president Florentino Perez, who will nevertheless have been warmed by the team’s display in this last 32 first leg clash.

Melilla may not be Barca or Manchester City but there was plenty to like about Real’s performance, not least the bright debut of highly-touted Brazilian teenager Vinicius Junior.

After catching the eye in Solari’s Castilla side the 18-year-old Flamengo recruit was handed his first team starting debut, and was one of Real’s best players.

His superb pass set up Asensio for Real’s second on the stroke of half-time, after Benzema playing as a central striker had tapped in Odriozola’s assist from close range on 28 minutes.

At the restart Solari made two changes, introducing Nacho for Sergio Ramos with Benzema replaced by Federico Valverde.

Melilla began the second period brightly, as they had done the first, proving more of a threat to their well-heeled but hurting visitors.

Against the run of play only a fine point-blank save from Melilla keeper Dani Barrio denied Dani Ceballos on the hour.

Then Vicinius almost marked his first team arrival with a goal, his shot thudding off the crossbar.

Odriozola bagged his first goal for Real, firing into an empty net after good work from Vicinius and Reguillo before substitute Gonzalez headed home.

Solari said on Tuesday he was open to becoming Real coach on a long-term basis, and as a statement of intent, he could not have asked for much more from his first game in charge.

The Argentinian, who spent five years playing for Madrid between 2000 and 2005, is likely to remain in post for Real’s La Liga game at home to Real Valladolid on Saturday and could stay on for next week’s trip to Viktoria Plzen in the Champions League.

Madrid have sounded out former Chelsea and Juventus coach Antonio Conte but initial talks have reportedly not gone smoothly. Belgium boss Roberto Martinez and the club’s former midfielder Guti have also been linked.

But if Solari continues to impress he may well find himself signing a full time contract as he seeks to emulate another former Castilla coach who went on to glorious innings as Real boss — Zinedine Zidane.