Twitter Inc. on Sunday launched an advertising service in the Middle East and North Africa (MENA) as the social media firm seeks to exploit a tripling of its regional subscriber base following its widespread use during the Arab Spring protests.

Digital advertising is relatively undeveloped in the region, accounting for an estimated 4 percent of its total advertising spending, tech-savvy population and rising Internet penetration points to significant potential for growth.

“The two are interconnected – the rapid growth of our user base with the timing of why we want to help brands connect with that audience,” said Shailesh Rao, Twitter vice-president for international operations.

Twitter does not provide a regional breakdown of its more than 200 million users worldwide, but Rao said its MENA subscriber base had tripled in the past 12 months.

Twitter says the products it promotes typically has an audience response rate of 1 to 3 percent, significantly higher than traditional advertising rate of 0.1 to 0.5 percent. 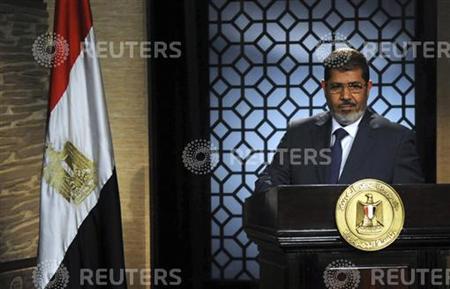 Egypt’s Islamist President-elect Mohamed Mursi will give a speech to crowds in Tahrir Square on Friday but his party appears to have lost in a power struggle with the ruling military council over where he will take his oath of office.

Details about the historic swearing-in ceremony were announced in a late statement from the presidency on Thursday which stated that Mursi will take the oath of office in front of the Supreme Constitutional Court on Saturday at 11 a.m. Cairo time (0900 GMT).

After being sworn-in as the first freely elected civilian president of the biggest Arab state, Mursi will attend a celebration in Cairo University where he will give a speech, according to the presidency statement.

The Muslim Brotherhood had wanted Mursi sworn-in before parliament, in line with past practice, but an army-backed court dissolved the Islamist-dominated lower house earlier this month.

The generals said the same court should hear Mursi take his oath of office.

Mursi held talks about the oath-taking on Thursday with the Muslim Brotherhood’s general guide Mohamed Badie and prominent public and legal figures and politicians at the presidential palace.

Following the meetings, a presidential spokesman issued a statement that mentioned only Mursi’s plans to address the nation on Friday from Tahrir Square where hundreds of protesters have been camped out for weeks to press the military council to swiftly transfer all powers to civilian rulers.