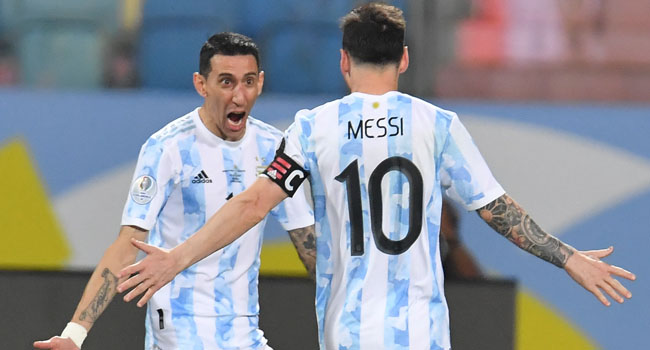 Lionel Messi scored one goal and created two others as Argentina beat Ecuador 3-0 in Goiania on Saturday to reach the Copa America semi-finals.

In Tuesday’s last four match, the 14-time winners will play Colombia, who beat Uruguay on penalties earlier in the day.

The scoreline was harsh on Ecuador, who ended the game with 10 men after Pedro Hicapie’s dismissal but had been competitive throughout.

“The truth is it was a very tough match. We knew the difficulty of playing Ecuador, who work hard with players who are fast, physically strong, young,” said Messi.

“It was a battle until we managed the (second) goal.”

Argentina made a bright start and Martinez almost opened the scoring with a moment of brilliance. He chipped the ball over goalkeeper Hernan Galindez and then volleyed goalwards, only for Robert Arboldea to block the ball on the line.

Moments later Martinez had a shot deflected wide and from the resulting corner, German Pezzella volleyed into the side netting.

Carlos Gruezo almost gifted Argentina a goal when his attempted back pass sent Messi clean through with only Galindez to beat, but the six-time Ballon d’Or winner saw his shot cannon back off the post.

Up the other end, goalkeeper Emiliano Martinez had to be alert to parry a stunning 20-yard volley by Sebastian Mendez.

Argentina had their own let off seven minutes from half-time when Pervis Estupinan crossed from the left and Enner Valencia’s flicked header narrowly evaded the sliding Alan Franco at the back post.

READ ALSO: [‘I Will Do It’]: Oliseh Says He Is Open To Helping Nigerian Football

Two minutes later Argentina were in front, with Messi the architect.

First he played in Nicolas Gonzalez on goal but when he was tackled by Galindez, Messi reacted quickest and teed up De Paul to score.

There was still time before the break for Galindez to make an incredible double save from Gonzalez, before Valencia somehow headed wide from six yards out.

After the break, Valencia remained Ecuador’s most likely route back into the match and the livewire forward’s near post shot hit Martinez’s leg before going behind.

A wicked Estupinan cross was then almost turned into his own net by Gonzalez.

Messi came close to killing off the tie but his curled effort sailed just past the post, while Aston Villa goalkeeper Martinez denied substitute Gonzalo Plata an equaliser with a near-post block.

And Hincapie completed a miserable few minutes as he was dismissed in injury time after dragging back substitute Di Maria when clean through, with Messi despatching the free-kick.

Goalkeeper David Ospina was the hero as Colombia beat Uruguay on penalties in Brasilia.

Ospina saved two spot-kicks in the shoot-out on the day he earned his 112th Colombian cap, moving clear of the previous national record he shared with the iconic Carlos Valderrama.

He dedicated the victory to his civil strife-torn country that would have been one of the twin hosts alongside Argentina before South American football’s governing body CONMEBOL moved the tournament to Brazil over coronavirus pandemic concerns and social unrest in Colombia.

“We just want to give joy to our country, a country we want to be full of peace, full of people sharing and enjoying, because we have a beautiful country,” said Ospina, 32.

There was little to report in a drab 0-0 draw over the regulation 90 minutes before the quarter-final tie went straight to penalties.

Ospina saved from Jose Gimenez and Matias Vina while Colombia scored all four of their penalties.

It was a huge disappointment for Uruguay’s star forward pair Edinson Cavani and Luis Suarez, who both converted their spot-kicks but almost certainly have played in their last Copa.

On Friday, Brazil beat Chile 1-0 to reach Monday’s semi-final against Peru, who defeated Paraguay 4-3 on penalties after an eventful 3-3 draw that saw both sides finish with 10 men. 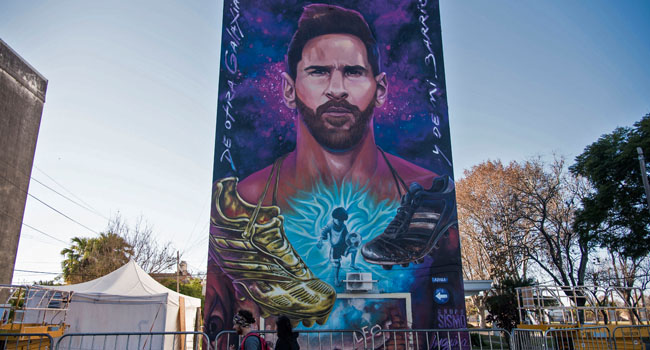 “From another galaxy… and from my neighborhood,” declares a freshly painted mural of Lionel Messi in the Argentinian town where he was born 34 years ago.

The mural covers one end of a four-story apartment building in the La Bajada neighborhood of Rosario where the star lived as a child, and faces the primary school he attended.

“We thought of Leo and the admiration we have for him and we thought that there is nothing big enough to express that in Rosario,” Marlen Zuriaga, one of the muralists, told AFP.

The 14-meter-high, 8-meter-wide artwork unveiled on Thursday depicts a bearded, shirtless Messi, and the smaller figure of the player as a child juggling a ball.

READ ALSO: [‘I Will Do It’]: Oliseh Says He Is Open To Helping Nigerian Football

The adult Messi has a pair of boots, laces tied together, hanging around his neck. One boot is black and the other gold, depicting the record six Golden Shoes Messi has won as top scorer in Europe.

The Barcelona legend — widely considered the best soccer player of the modern era — has been the leading scorer in Spain’s La Liga a record eight times.

The Argentina captain is currently leading his team at the Copa America in Brazil where he was the top scorer in the group stage with three goals. Argentina next play Ecuador in the quarter-finals on Saturday. 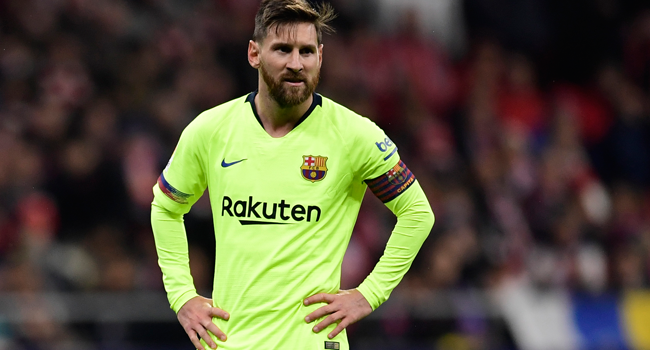 Barcelona president Joan Laporta said he is “convinced” Lionel Messi wants to stay at the club after he scored twice in the team’s thumping 4-0 win over Athletic Bilbao in the Copa del Rey final on Saturday.

Messi is yet to confirm whether he will stay this summer, with the possibility that his seventh Copa del Rey triumph could be the last trophy he wins for Barca.

“Leo is the best player in the world, he is a player who is deeply rooted in the club, who loves Barca,” said Laporta after the final in Seville.

“I am convinced that he wants to stay and we already know that we are going to do everything in our power, within the possibilities of the club, to ensure he continues with us. It is what we want the most.”

Messi scored a spectacular goal that he started in his own half at La Cartuja before rounding off the victory with a strike into the corner for his 31st goal of the season.

It is the 13th consecutive campaign that Messi has scored more than 30 goals for Barcelona. 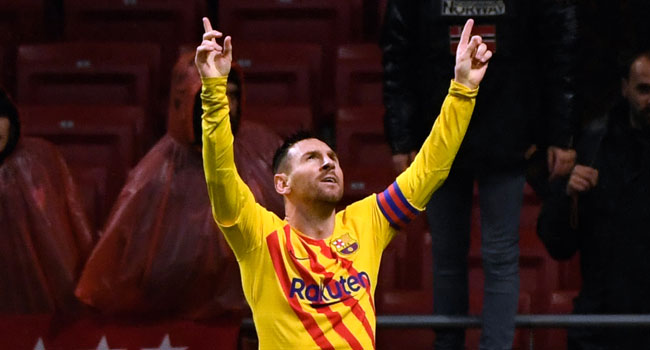 Lionel Messi is set to equal Xavi Hernandez’s record of 767 appearances for Barcelona after he was named in the team to play against Huesca on Monday.

Messi was in the starting line-up for the match at Camp Nou where Barca will look to put further pressure on Atletico Madrid in La Liga’s title race.

Xavi spent 17 years at Barcelona before leaving in 2015 and is now the coach of Al-Sadd in Qatar.

Messi, meanwhile, has been an ever-present in the Barca team since 2004 and is expected to break Xavi’s record against Real Sociedad on Sunday.

“It could only be Leo”, Xavi told Mundo Deportivo on Monday.

“It is totally fair that the best player in history is the one who has defended Barca’s colours the most times.” 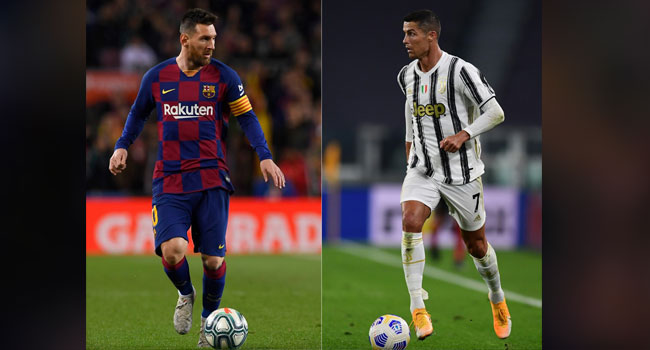 The elimination of both Barcelona and Juventus from the Champions League means neither Lionel Messi nor Cristiano Ronaldo will feature in the quarter-finals of Europe’s elite club competition, which this week marked a year since matches were last played in full stadiums.

The end of the Messi-Ronaldo era has been approaching for some time and both going out of the Champions League, the tournament that together they dominated for so long, in the last 16 is another step closer to that point.

At least one of them had made it to the quarter-finals in each of the previous 15 campaigns, although Ronaldo had gone out while Messi was injured in the latter stages in the first year of that run when Barcelona won the trophy in 2005/06.

Before that, in 2004/05, Ronaldo had just turned 20 as his Manchester United side lost to AC Milan in the last 16. Messi was still 17 and just breaking through at Barcelona as they lost to Chelsea at the same juncture.

Between them, they have won the Champions League nine times over the period.

They are by some distance the all-time top scorers in the competition, with Ronaldo on 134 goals followed by Messi on 120. The next highest scorer is Robert Lewandowski with 72. Over 12 straight seasons from 2008 to 2019 one of them was the top scorer in the competition every year. Now the latter stages will go ahead without them.

Ronaldo, who turned 36 last month, cut a frustrated figure for much of Juve’s game against Porto on Tuesday as the Italians went out on away goals.

He didn’t score in either leg against Porto. Two of his four goals in the group stage were penalties.

“With him, we usually start with a goal’s advantage,” said Juventus coach Andrea Pirlo. “But it can also happen to the greatest champions not to score.”

Messi, 34 in June, scored both Barcelona’s goals in their 5-2 aggregate defeat by Paris Saint-Germain, including a stunning long-range hit in the second leg, but a later penalty miss killed off any hopes his team had of a remarkable comeback.

It is now over to the new superstars, most notably Kylian Mbappe and Erling Braut Haaland, as the Champions League reaches its business end.

However what the competition is really crying out for, even more than Messi and Ronaldo, is fans in the stands.

The last time a knockout tie was played before a crowd was exactly a year ago, on March 11 last year, when Liverpool faced Atletico Madrid in front of more than 52,000 people packed into Anfield.

It was the same day that the World Health Organization first described the Covid-19 outbreak as a pandemic.

Other European matches that midweek had already been played behind closed doors.

On Thursday, March 12, two Europa League last 16 first-leg games went ahead in front of crowds, with close to 50,000 inside Ibrox to see Rangers take on Bayer Leverkusen.

By that weekend football had ground to a halt almost everywhere as lockdowns took hold. The sport began to return in Europe a couple of months later but, one year on, clubs are straining under the weight of the economic hit of playing games behind closed doors.

The sense of occasion has essentially gone too, even if some supporters managed to break France’s strict night-time curfew to let off fireworks right outside the ground during PSG’s game against Barcelona on Wednesday.

Instead of a packed Anfield, Liverpool’s home game against RB Leipzig on Wednesday was relocated to an empty stadium in Budapest, where Manchester City will face Borussia Moenchengladbach next week.

The football remains of a high quality, but it is not the same.

“I said it 5,000 times, football would not be the game we love,” without fans, said Liverpool manager Jurgen Klopp this week.

“Nobody would be interested, nobody would want to watch it in a stadium. I can’t wait for the day when people are allowed again to go to the stadium.”