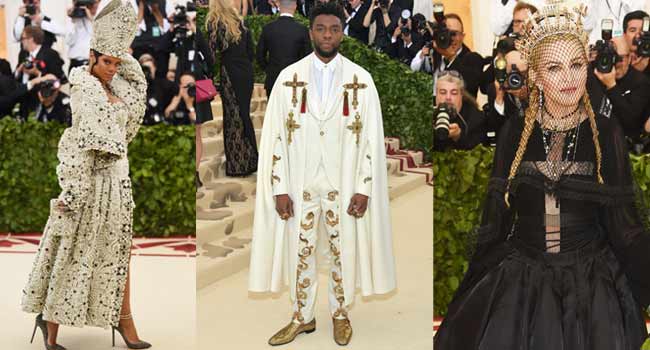 Madonna and Rihanna stunned as fashion high priestesses on the red carpet at New York’s Met Gala on Monday, headlining the most sought-after invitation in the celebrity universe.

Madge, the Catholic girl from Michigan and queen of pop whose 1989 hit “Like a Prayer” remains a dance-floor classic 30 years later, presided over the “Sunday Best” theme dressed head to toe in Jean Paul Gaultier.

The 59-year-old mother of six balanced a golden crown studded with crucifixes on her head, shrouded her face in a black fishnet mantilla and donned a very flouncy, very full and very black gown.

Held every year on the first Monday in May, the black-tie extravaganza is the chief source of income for the Metropolitan Museum of Art’s Costume Institute, reportedly raising more than $12 million in 2017.

Tickets are said to cost $30,000 each or $275,000 for a table, but all guests must be invited, ruling out all but the most elite Hollywood actors, music superstars, top models and fashion designers.

If A-listers have shunned the theme in the past, this year’s “Sunday Best,” a nod to the “Heavenly Bodies: Fashion and the Catholic Imagination” exhibition at The Costume Institute, proved popular.

Wing and a prayer

Rihanna, the Barbadian superstar and one of the biggest pop stars on the planet, proved her red carpet pulling power in a jewel-encrusted gown from John Galliano’s Maison Margiela and bejeweled bishop’s hat.

Katy Perry dressed as an angel with enormous feathered white wings that towered over her petite frame and trailed the floor, a Versace chain-mail gold mini-dress and thigh-high stilettoed gold boots

Clooney, the international human rights lawyer and this month’s Vogue cover star, wore the pants as she arrived on the arm of her movie star husband George, dressed in blue cigarette trousers with a strapless bustier and voluminous skirt by up-and-coming Briton, Richard Quinn.

Jennifer Lopez and Alex Rodriguez, the celebrity couple of the moment, also stepped out, the “Jenny from the Block” songstress in a beaded and feathered gown with a giant mosaic crucifix on the front.

Sarah Jessica Parker, a doyenne of New York high society and the “Sex and the City” fashionista, walked the red carpet in full-length gold brocade by Dolce and Gabbana and an astonishing headpiece.

But for all the glitz, the event has also been dogged by rumors that once inside, it can be intimidating and unfriendly.

Tina Fey once called it a “jerk parade,” complaining to David Letterman that: “If you had a million arms and all the people you would punch in the whole world, they’re all there.”