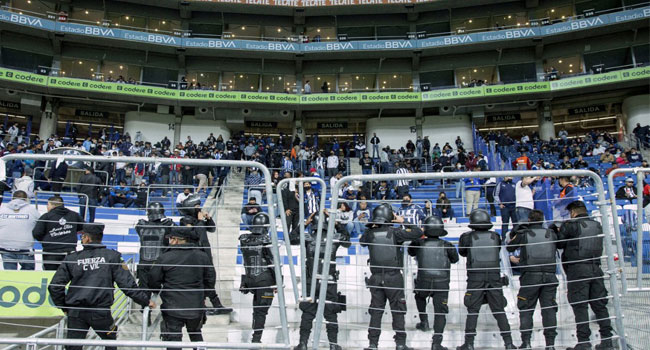 Fan violence, homophobic chanting, and signs of criminal gangs infiltrating the stands — challenges are stacking up for Mexican football authorities four years before they co-host the World Cup.

The football-mad nation was shocked by a mass brawl between rival spectators last weekend in the central city of Queretaro that left 26 people injured and sent families and children running to safety.

The fight broke out just after the hour mark of the March 5 game between top-division team Queretaro and defending champions Atlas, leading to 17 arrests.

Experts said that the clashes bore some of the hallmarks of gang violence that permeates Mexico and suggested there were links between cartels and organised fan groups known as “barras.”

“This level of violence reveals an invisible and silent penetration of criminal groups,” said Hugo Sanchez Gudino, professor at the National Autonomous University of Mexico.

“Generally when two barras in Mexico have rivalries and confront each other, it’s like any street fight, but what happened in Queretaro was more violent with certain traits of drug trafficking,” he told AFP.

When organized crime groups clash they sometimes strip their enemies of their clothing, which was also seen in Saturday’s brawl, Sanchez Gudino said.

“That is an indication that these criminal groups are in those barras,” he added.

Mexico has been trapped in a spiral of cartel-related violence since 2006 when the government launched a controversial anti-drug military operation.

There have been more than 340,000 murders since then, most of them blamed on fighting between criminals, according to official figures.

In response to the stadium brawl, the Mexican Football Federation (FMF) ordered Queretaro to play home matches without spectators for a year and told its owners to sell the franchise.

The club’s directors will be banned from the league for five years and the club will be fined 1.5 million pesos (about $70,000).

Queretaro’s barras were banned from home games for three years and from away matches for one year.

Those of Atlas were barred from away games for six months, disappointing some football figures who called for a permanent ban of the hardcore fan groups from stadiums.

World football’s governing body FIFA hit out at the “unacceptable and intolerable” violence.

But FMF president Yon de Luisa said he was confident that FIFA would allow Mexico to jointly host the 2026 World Cup along with the United States and Canada.

Although FIFA and the Confederation of North, Central America and Caribbean Association Football expressed concern at the brawl, there was no talk of Mexico losing its role as co-host, he said.

According to Sanchez Gudino, Mexico is one of the countries that generates the most money during World Cups, so such a harsh punishment would be “an own goal for FIFA.”

Mexico, Canada, and the United States are forecast to generate net gains of $3-4 billion from tickets, tourism, advertising, and commerce linked to the World Cup, according to US-based Boston Consulting Group.

Mindful of the high stakes, Mexican football authorities are also trying to stamp out a homophobic chant frequently shouted at opposing goalkeepers when they take a kick.

Mexico has been repeatedly sanctioned over the years for fans shouting the anti-gay slur.

The FMF last month introduced a system of online ticket registration and QR codes for attendees during World Cup qualifiers.

It also boosted stadium security to identify anyone using the homophobic chant, and if caught the offenders face a five-year ban from stadiums. 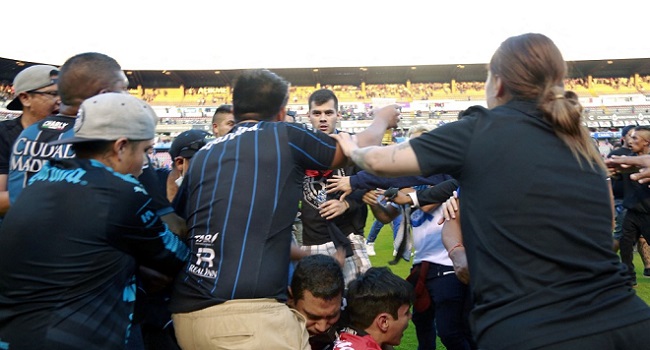 At least 22 people were wounded when violence erupted Saturday in the stands of a Mexican football match, which was called off when the clash spilled onto the field.

The game between Queretaro and Atlas at La Corregidora stadium in the city of Queretaro — the ninth round of the 2022 Clausura football tournament — was in its 63rd minute when fights between opposing fans broke out.

As security guards opened the stadium doors to allow fans to get to safety, some instead continued to exchange blows, forcing the game to be stopped and sending the players to the locker room.

Chaotic scenes unfolded, with fans tumbling over each other and others cowering under a shower of furious kicks and punches.

READ ALSO: At Least Six Killed In US Tornado

A VAR monitor was destroyed during the clashes, with images posted to social media showing injured fans lying prostrate.

“There is no report of people dead, 22 people injured… two of them seriously,” the civil protection for the state of Queretaro said hours after the match was called off.

Liga MX president Mikel Arriola slammed the events on Twitter: “Those responsible for the lack of the security at the stadium will be exemplarily punished. The safety of our players and fans is priority!”

In a video posted on social networks, Arriola announced that all matchday games due to be played Sunday were suspended “in solidarity with the people affected” and to prevent any repetition.

Atlas demanded in a statement that authorities and the league open an investigation into the fight in order to determine “responsibilities to those involved” and ensure “the full force of the law will be applied.”

The Queretaro club also condemned the violence in a statement and said it was in contact with the authorities so that “they act vigorously against anyone responsible.”

Queretaro governor Marucio Kuri said the owners of the club “and institutions must answer for the facts.”

“I have given instructions for the law to be applied with all its consequences,” he tweeted.