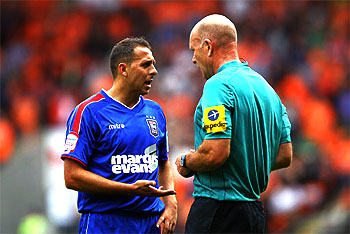 Michael Chopra, Ipswich striker has been charged with horserace fixing by the British Horseracing Authority (BHA).

Also charged along with the 28 year old is Nottingham Forest midfielder James Coppinger and former England Under-21 international Mark Wilson alleged to have conspired to fix races with jockey Andrew Heffernan.

They were charged with conspiring to ‘commit a corrupt or fraudulent practice’, while Chopra and Wilson were further charged with offering bribes to Heffernan.

Jockey Heffernan, who now rides in Australia, faces five charges of corruption and could be banned for up to eight years. The charges span 12 races in 2010 and 2011.

Chopra has a long-standing gambling addiction and has lost up to two million pounds, with Ipswich Town paying him 250,000 pounds when he first joined to help pay off one particular debt, and have subsequently paid wages directly to those he owes.

The three footballers will face a three-year ban from horse racing, including any involvement and from attending racecourses.

The Football Association is taking a backseat, allowing the BHA to complete their enquiries, before deciding on any disciplinary action.