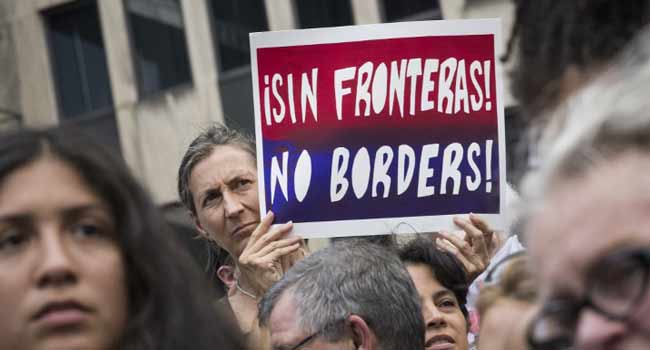 The US government said Thursday that hundreds of families it broke up at the border with Mexico have not been reunited as a court-ordered deadline to return all children to their parents elapsed.

A federal judge in California had ordered that all eligible migrant families be brought back together by 6:00 pm (22:00 GMT) and officials said in a court filing that 1,442 children aged five and older had been reunited with their families.

A further 378 children had already been released under other “appropriate circumstances,” the filing said, but more than 700 children remain in custody.

The government said the deadline had been met, however, because those families were ineligible, either because family ties have not been confirmed, or the parent has a criminal record, a communicable disease or cannot be found. 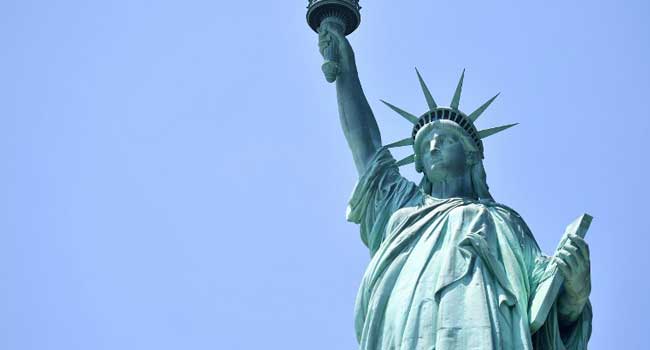 A woman was arrested Wednesday after staging a dramatic protest against President Donald Trump’s separation of migrant families, climbing the Statue of Liberty and forcing its evacuation on Independence Day.

Wearing a “Rise and Resist” T-shirt, the woman on the fabled symbol of welcome to immigrants at one point told authorities that she would only come down when parents are reunited with all migrant children separated from them by the Trump administration.

“She resisted at the beginning. She would not come down by voice command,” National Park Service spokesman Jerry Willis told AFP.

So police placed her in custody, Willis said, noting that the woman was facing multiple federal charges including trespassing and disorderly conduct.

“We assume that she is protesting,” Willis said, based on the woman’s remarks to police.

After nearly four hours on the statue, the woman finally accompanied police down off the monument, tethered to them by wires.

The woman, who has not yet been identified, at one point walked from one side to the other beneath the statue’s sandal.

New York police assisted US Park Police to remove her from Lady Liberty.

Local media first reported that the woman was among demonstrators opposed to Trump’s immigration policy who protested at the site earlier.

But Rise and Resist NYC, which organized the protest, said her protest on the statue was not part of the group’s move.

At least six people were arrested for hanging a banner around the base of the statue that read “Abolish ICE,” referring to US Immigration and Customs Enforcement, the agency at the forefront of the immigration debate.

They too were facing misdemeanour federal charges, Willis said.

Cruise operator Statue Cruises said it had to turn away more than 2,000 people waiting to take their tour to the famed statue.

Trump has made cracking down on illegal immigration a cornerstone of his administration.

As a result of Trump’s crackdown, distraught children were separated from their families and, according to widely broadcast pictures, held in chain-link enclosures.

His one-time “zero tolerance” practice of separating migrant parents from their children at the Mexican border triggered international condemnation.

While the policy was abandoned, it is still unclear how and when some 2,000 migrant children will be reunited with their parents. 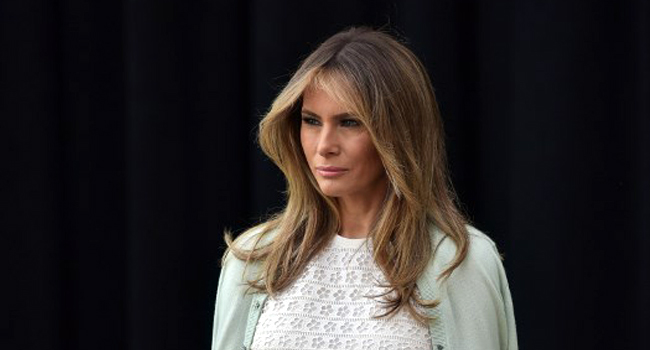 Melania Trump surprised the world by visiting child migrants on the US-Mexico border Thursday — but it was her choice of clothing for the trip that stunned the internet: a jacket emblazoned with the words “I really don’t care, do you?”

A tone-deaf sartorial decision — or a hidden message from the first lady? And if so, to whom?

The images of Melania Trump sporting the olive green khaki jacket as she boarded a flight to Texas — which immediately went viral — surfaced as the White House struggles to calm international anger over the practice of splitting migrant children from their parents.

Asked about the military-style jacket with large white brush-style lettering — apparently sold for $39 at Zara, according to Daily Mail which first spotted the odd choice of outfit — the first lady’s spokeswoman Stephanie Grisham said “there was no hidden message.”

“It’s a jacket,” Grisham said. “After today’s important visit to Texas, I hope the media isn’t going to choose to focus on her wardrobe.”

By the time she arrived in McAllen, Texas the first lady had changed out of the controversial garment into a cream button-up safari-style jacket.

Melania Trump’s unannounced trip to a youth shelter for migrants and a border patrol processing center came one day after President Donald Trump made a sudden decision to end the practice of splitting immigrant families that has left more than 2,300 minors separate from their parents or guardians.

Images and recordings of distressed children held in enclosures akin to cages have sparked global fury.

The first lady herself called for a political compromise to end the stripping of children from their parents — the result of the Trump administration’s “zero tolerance” policy against illegal border crossings, in effect since May.

It was not the first time Melania Trump raised eyebrows for her fashion choices when out in the field: last year she wore needle-thin high stiletto heels to observe the devastation wrought by Hurricane Harvey. 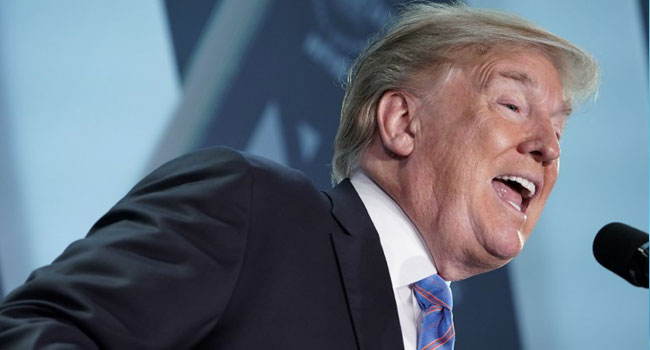 United States President Donald Trump said on Wednesday that he is preparing to sign an executive order to halt the separation of migrant children from their parents on the US border, as global criticism of the practice mounted.

The announcement came after his administration was besieged from all sides over the policy, launched in early May, to arrest anyone crossing the border illegally.

That crackdown sent the adults for prosecution as criminals — and removed their children from their care, sending them to tent camps and other facilities where they were unable to contact their loved ones.

As images and accounts of sobbing children wrested from their parents circulated, Trump’s own Republican Party began to rebel, prompting him to do an about-face after days of saying it was up to Congress to act, and pledge executive action.

“We want security for the country,” Trump said at a meeting with Republican lawmakers at the White House. “And we will have that at the same time we have compassion, we want to keep families together.”

“We are signing an executive order in a little while” to end the practice, Trump said.

The president, however, made clear he was not easing up on his determination to shut down the border to illegal immigration, calling it a source of rampant crime and drugs.

“We still have to maintain toughness, or our country will be overrun by people, by crime, by all of the things that we don’t stand for and we don’t want,” he said.

May said images of migrant children kept in cage-like units were “deeply disturbing,” and the Council of Europe, a global human rights watchdog, said Trump had abdicated any claim to moral leadership in the world.

“A person’s dignity does not depend on them being a citizen, a migrant, or a refugee. Saving the life of someone fleeing war and poverty is an act of humanity,” the pope said on Twitter.

Trump continued to blame opposition Democrats and the media for the crisis on the southern US border.

After a downturn last year, since October, the number of migrants seeking to cross the southwest US border from impoverished Guatemala, El Salvador and Honduras, as well as from Mexico, has surged.

From March to May this year, more than 50,000 people a month were apprehended for illegally crossing the border from Mexico. About 15 per cent of those are arriving as families, and eight per cent as unaccompanied children.

Nearly all of the families, and many others are officially asking for asylum, citing the incessant violence in their home countries.

Aiming to deter more arrivals, in early May, the Trump administration announced it would arrest and criminally charge all adults.

Meanwhile, any children entering the country with them, including infants, would be taken away and held separately.

The issue has struck an emotional chord, amid accounts of children screaming and crying in the tent camps prepared for them in southern Texas.

“We were outside, and you could hear voices of children that appeared to be playing or laughing, but when they opened the door, we saw around 20 to 30 10-year-old boys in one of these chain-link enclosures, and they were crying and screaming and asking for their mothers,” pediatrician Marsha Griffin told AFP in El Paso.

The government has said the families could be reunited eventually after the parents were processed in court.

But on Tuesday, a top official from the Department of Health and Human Services, charged with caring for more than 2,300 such children taken since May 5, admitted they have no system in place to do so.

Ahead of Trump’s statement, House of Representatives Speaker Paul Ryan said the House will vote Thursday on legislation that will stop the family separation.

Under the legislation, Ryan said, “We are going to take action to keep families together while we enforce our immigration laws.”

But it wasn’t clear that the Republican bill, which includes other key immigration law changes, would pass, possibly precipitating Trump’s action. 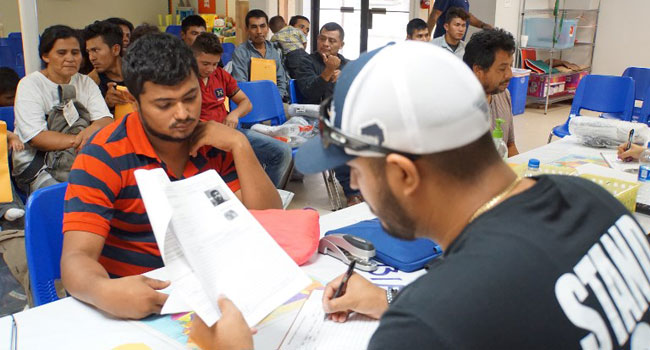 Mexico strongly condemned US President Donald Trump’s administration on Tuesday for its policy of separating immigrant children and parents detained after crossing the US-Mexican border, calling it “inhuman.”

“In the name of the Mexican government and people, I want to express our most categorical and energetic condemnation of this cruel and inhuman policy,” Foreign Minister Luis Videgaray told a press conference.

“We call on the United States government, at the highest level, to reconsider this policy and give priority to the wellbeing and rights of these boys and girls, regardless of their nationality and immigration status.”

The Trump administration faces a growing swell of condemnation at home and abroad for the separations, the product of a “zero-tolerance” policy on undocumented migrants.

The United Nations, international rights groups, Christian evangelicals, the pope, former US first ladies and prominent figures in the president’s own Republican party have all criticised the policy.

Guatemala expressed its “concern” Tuesday over the policy and its effects. The human rights ombudsmen of Mexico, Colombia, Ecuador, Guatemala and Honduras meanwhile petitioned the Inter-American Commission on Human Rights in Washington to intervene to block the “dangerous” policy.

US officials say more than 2,300 children have been separated from their parents or guardians since early May, when the “zero-tolerance” policy was announced.

Lawmakers who visited minors in detention in Texas and California have described crying children held in cage-like conditions behind chain-link fencing, with no idea when they will see their parents again.

A defiant Trump has vowed to prevent the United States from becoming a “migrant camp” and accused the opposition Democratic party of causing the crisis by blocking immigration reform legislation.

The vast majority of separated families come from Central America, where brutal gangs have made their countries among the most violent in the world. Around one percent of the detained children are Mexican, said Videgaray.

US-Mexican relations have been strained since Trump won election in 2016 after a campaign laced with anti-Mexican barbs and promises to build a wall on the two countries’ border and make Mexico pay for it.

US tariffs on Mexican steel and aluminum, Trump’s insistence on overhauling the North American Free Trade Agreement (NAFTA) and his attacks on migrants have only added to the tension.