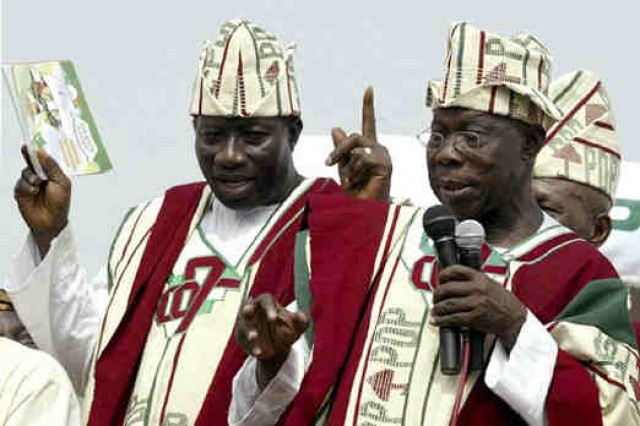 Former President Olusegun Obasanjo on Tuesday rebuffed claims by President Goodluck Jonathan that the army invasion of Odi – a small community in Bayelsa state – in 1999 was a failure.

During last Sunday’s presidential media chat, President Jonathan had said that the invasion of Odi ordered by Mr Obasanjo in 1999 was a failure.
He had said: “After that invasion, myself and the governor entered Odi…and saw some dead people. Most of the people that died in Odi were mostly old men, women and children, none of the militants was killed.

Reacting to these assertions, Femi Fani-Kayode, who served as Special Assistant on Public Affairs and subsequently Minister of Aviation during Mr Obasanjo regime, released a press statement claiming that the invasion of Odi not only killed the militants but decimated their capacity to wage acts of terror against the state.

The statement reads: “During a live broadcast of the Presidential Media Chat to the nation on the evening of November 18, 2012, President Goodluck Jonathan said that the military operation in Odi by the Nigerian Armed Forces in 1999, which was ordered by President Olusegun Obasanjo, did not solve the problem or stop the killing of soldiers, policemen and innocent civilians in the Niger Delta area by the terrorists and militants. He also said that all he saw in Odi after he went there on an official visit as Deputy Governor were the dead bodies of old people. With the greatest respect to Mr. President this is factually incorrect. He has either forgotten the relevant facts or he has been misinformed. Whichever way he is mistaken and it is important for those of us that proudly served the Obasanjo administration to respond to him in order to clarify the issues, clear the air and set the record straight for the sake of history and posterity.

“I had the privilege of being briefed about all the facts by President Olusegun Obasanjo himself and Col. Kayode Are, the former DG of the SSS, immediately after the Presidential Media Chat and I believe that it is appropriate to share some of those facts with members of the Nigerian public given the grave assertion and serious charge that President Jonathan has made. Those facts are as follows:
Why Army invaded Odi

“Five policemen and four soldiers were killed by a group of Niger Delta militants when they tried to enter the town of Odi in Bayelsa State in order to effect their arrest. This happened in 1999. After the brutal killing of these security personnel, President Olusegun Obasanjo asked the then Governor of Bayelsa State, Governor Alamieyeseigha, to identify, locate, apprehend and hand over the perpetrators of that crime.

“The Governor said that he was unable to do so and President Obasanjo, as the Commander-in-Chief of the Nigerian Armed Forces, took the position that security personnel could not be killed with impunity under his watch without a strong and appropriate response from the Federal Government. Consequently he sent the military in, to uproot and kill the terrorists and to destroy their operational base which was the town of Odi. The operation was carried out with military precision and efficiency and it’s objectives were fully achieved. The terrorists were either killed and those that were not killed fled their operational base in Odi. They were uprooted, weakened, demoralised and completely dispersed. That was the purpose of the whole exercise and that purpose was achieved. The truth is that the killing of security agents and soldiers with impunity by the Niger Delta militants virtually stopped after the operation in Odi and remained at a bare minimum right up until the time that President Obasanjo left power eight years later in 2007. I advise those that doubt this to go and check the records.

“The same thing was done in Zaki-Biam in Benue State in the North-central zone of Nigeria in 2001 after 19 soldiers were murdered in cold blood and then brutally beheaded by some terrorists from that area. Again after the Federal Government’s strong military response in Zaki Biam, the killing of security personnel with impunity stopped. The objectives of the military operations in both Odi and Zaki-Biam were to stop such killings, to eliminate and deal a fatal blow to those that perpetrated them and to discourage those that may seek to carry out such barbarous butchery and mindless violence in the future.

“Those were the objectives and nothing more and clearly those objectives were achieved. There is no doubt that after Odi, there were still unrest, agitations, protests, kidnappings and the blowing up and sabotage of oil pipelines in the Niger Delta area but there were hardly any more attacks on or killing of soldiers and security personnel by the terrorists and militants because they knew that to do that would attract a swift and forceful reaction and terrible retribution from the Nigerian military.
Invasions objective achieved

“To stop and deter those attacks and killings was the objective of President Obasanjo and that objective was achieved. President Goodluck Jonathan was therefore in error when he said that Odi did not solve the problem of killings in the Niger Delta area by the Niger Delta militants. Not only did it stop the killings but it is also an eloquent testimony of how to deal with terrorists, how to handle those that kill our security personnel with impunity and how to deter militants from killing members of our civilian population and thinking that they can get away with it. If President Obasanjo had not taken that strong action at that time, many more of our civilian population and security personnel would have been killed by the Niger Delta militants between 1999 and 2007.

“By doing what he did at Odi and Zaki-Biam, President Obasanjo saved the lives of many and put a stop to the killings and terrorism that had taken root in the Niger Delta area prior to that time.”

The former Aviation minister also said Mr Obasanjo’s comments last week on how to solve the Boko Haram problem were misconstrued and misrepresented in certain quarters.

“He never said that the Odi treatment should be applied to Boko Haram or that such action is appropriate in these circumstances. What he said was that a solution ought to have been found or some sort of action ought to have been taken sooner rather than allow the problem to fester over time like a bad wound and get worse.

“There can be no doubt that he was right on this because, according to President Jonathan’s own Chief of Army Staff, no less than 3000 people have been killed by Boko Haram in the last two years alone. That figure represents approximately the same number of people that were killed by the IRA in Northern Ireland and the British mainland in the 100 years that the war between them and British lasted and before peace was achieved between the two sides.

“The same number of casualties that the IRA inflicted on the people of the United Kingdom in 100 years, is the same number of casualties that Boko Haram have managed to inflict on our people in just two. This is unacceptable and it is very disturbing. The Federal Government must cultivate the courage and the political will to stop the killings by Boko Haram and to find a permanent solution to the problem.”