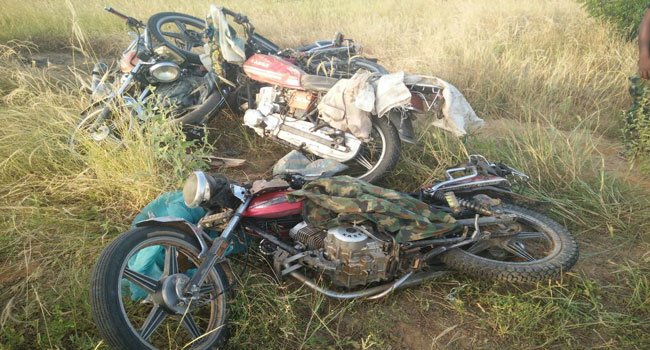 Troops of Operation Lafiya Dole on patrol in Borno State engaged some suspected members of Boko Haram terrorist group in a gun battle in Bulabulin, killing nine of them.

A statement by a spokesman for the army, Colonel Sani Usman, said the attack occurred on Wednesday morning.

“They engaged them in a fire fight that lasted for an hour.

He, however, said that troops hand-held radio was badly damaged during the encounter.

The spokesman for the army further reassured Nigerians that troops would continue the clearance operation of the remnants of the Boko Haram in all the nooks and crannies of their areas of operation with renewed vigour and determination.

This attack came a day after reports said at least eight people were killed after members of the terrorist group, Boko Haram, attacked three villages in Borno state, north-east Nigeria and hoisted their flag there.

The Multi-National Joint Task Force had on September 24 said it was conducting series of military operations aimed at closing down the Boko Haram insurgents in the Lake Chad Basin.