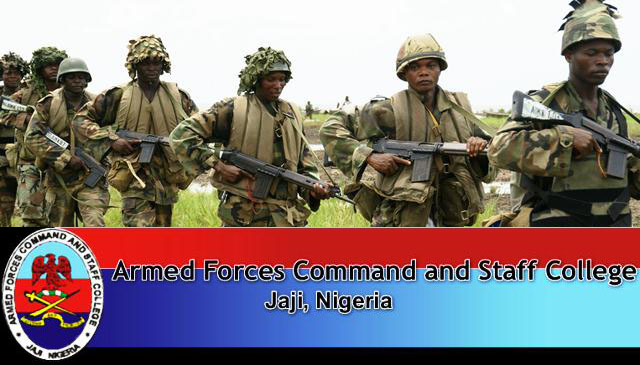 The Nigerian Senate has termed as inadequate the funding of the Armed Forces Command and Staff College, Jaji North West Nigeria.

At an oversight visit to the college by the Senate Joint Committee on Defence and Army on Thursday, the committee members lamented that the annual budgetary allocation to the college is insufficient to meet its demands, while at the same time; the funds approved are never released fully by the Ministry of Defence.

Worried by the insufficient funds allocated to the college in the 2013 budget, the committee said it was totally unacceptable that such a foremost military training institution in Sub Saharan Africa would be starved of funds to carry out its duties of churning out highly skilled officers for the country.

Chairman of the committee, Senator George Sekibo who led other members to the college said the committee will do everything within its powers to ensure that the institution is funded properly by the Federal Government, given its importance to the security of the nation.

Senator Sekibo told the commandant that the committee was at the college to ascertain if the funds approved to the college in the 2013 budget have been released by the relevant offices and also to know how the funds were spent.

In their separate presentations, the commandant of the college, Air Vice Marshal Eko Effiom Osim and Director of Finance, James Iliyasu told the lawmakers that out of the 3 billion Naira appropriated to the college for various projects this year, only 1.5 Billion Naira has been accessed on paper, while only the sum of 743 million Naira was released for Capital Expenditure as at October 31, 2013, a situation that has hindered rapid development of infrastructure in the college.

Despite the challenges, the commandant said the management has been able to execute some capital projects.

At the end of their presentation, the committee members were not impressed with the budgetary allocation to the college and blamed the Ministry of Defence and the Office of the Accountant-General of the Federation for the disparities in funds approved and the ones released to the college.

The committee however, expressed satisfaction with the expenditure pattern of the college and called on the Federal Government to take the college as a priority by allocating enough funds to the institution.

The Armed Forces Command and Staff College (AFCSC) Jaji,  is a joint Service Institution established in 1976 to offer increased capacity for academic and professional training of military officers and other ranks of the Nigerian Armed Forces.