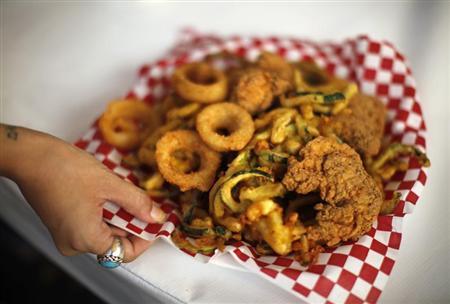 Forget abandoning carbohydrates or detoxing. The new dieting craze sweeping Britain and taking off in the United States lets people eat whatever they like – but only five days a week.

“The Fast Diet”, also known as the 5:2 diet, is the brainchild of TV medical journalist Michael Mosley and journalist Mimi Spencer and allows people to eat what they want for five days but only eat 600 calories a day on the other two.

Their book, “The Fast Diet”, has topped bestselling book lists in Britain and the United States this year and been reprinted more than a dozen times.

Mosley said the diet is based on work by British and U.S. scientists who found intermittent fasting helped people lose more fat, increase insulin sensitivity and cut cholesterol which should mean reduced risk of heart disease and diabetes.

He tried this eating regime for a BBC television science programme called “Eat, Fast, Live Longer” last August after finding out his cholesterol level was too high and his blood sugar in the diabetic range. He was stunned by the results.

“I started doing intermittent fasting a year ago, lost 8 kgs (18 pounds) of fat over 3 months and my blood results went back to normal,” Mosley told Reuters.

Mosley said he had been amazed at the way the diet had taken off with a list of websites set up by followers of the 5:2 diet or variations of the eating regime to share their experiences.

Following the success of “The Fast Diet”, Spencer joined forces with dietitian Sarah Schenker to bring out “The Fast Diet Recipe Book” in April which has topped amazon.co.uk’s food and drink list with 150 recipes containing under 300 calories.

Eating a 600 calorie daily diet – about a quarter of a normal healthy adult’s intake – could consist of two eggs for breakfast, grilled chicken and lettuce for lunch, and fish with rice noodles for dinner with nothing to drink but water, black coffee or tea.

One day at a time

Mosley put the diet’s success down to the fact it is psychologically attractive and leads to steady drop in weight with an average weekly loss of 1 pound (0.46kg) for women and slightly more for men.

“The problem with standard diets is that you feel like you are constantly having to exercise restraint and that means you are thinking about food all the time, which becomes self-defeating,” said Mosley.

“On this regime you are only really on a diet two days a week. It is also extremely flexible and simple.”

But as the popularity of the 5:2 diet has grown and become one of the most searched diets on the Internet, the NHS has started to look again at the diet and its effects.

On its website last month the NHS said the British Dietetic Association (BDA) reviewed a 2011 study by researchers at the UK’s University Hospital of South Manchester that suggested intermittent fasting could help lower the risk of certain obesity-related cancers such as breast cancer.

“The increasing popularity of the 5:2 diet should lead to further research of this kind,” the BDA said in a statement.

Schenker, a sports and media dietitian who works with football clubs and food companies, said it was a shame that the NHS had criticized the eating regime that had proved such a success with so many people.

“We are in the midst of an obesity crisis and you need to balance up which is worse – intermittent fasting of staying obese?” Schenker told Reuters.

Despite concerns raised by the NHS, the 5:2 diet has been widely praised by those who follow it.

Deb Thomas, 50, a management coach from London, said she has followed the diet for six months and dropped a couple of dress sizes. This has also inspired her husband to join her in fasting two days a week.

“It is such an easy diet to follow that fits into my way of life,” Thomas said. “You have a tough day of not eating but you know the next day you can eat normally again, and that keeps you going.”